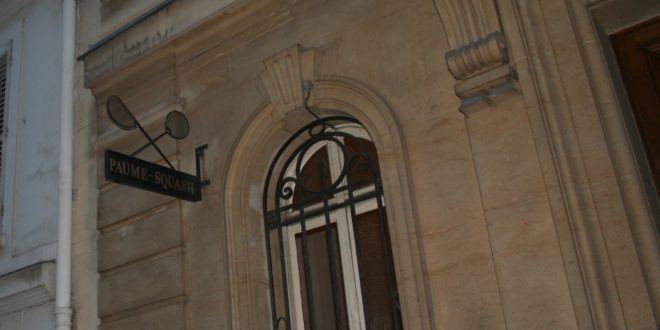 For the first time, the city of Paris will host a big international squash event*: The Women’s World Team Championship at the end of November and beginning of December. The tournament will be played in three different venues: the Jeu de Paume, the Squash Club of Saint-Cloud, and the Palais des Sports Robert Charpentier in Issy-les-Moulineaux, where a glass court will be set up for the occasion. Today, we focus on the iconic place that is the club of Jeu de Paume. 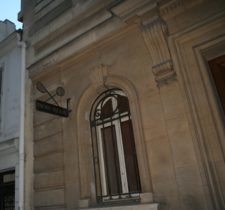 When you stand in front of the small façade, it’s difficult to imagine that you are about to enter a squash club, unless you notice the “Société Sportive du Jeu de Paume et de Racquets” sign on the door. Located on the last floor of a building in rue Lauriston, between Arc de Triomphe and Trocadéro, the club of Jeu de Paume (built in 1908) is the shelter of the oldest squash courts in France, as well as one of the three remaining real tennis (Jeu de Paume in English) court in the country. These two activities grew up at the club over the years and are played by accomplished players of all age ranges. The club has 350 members nowadays, including lawyers, businessmen and students of prestigious Parisian universities. We often see politicians and artists there. In 2015, Australian actor Hugh Jackman, known worldwide for the part of Wolverine in X-Men came to the Jeu de Paume to play squash, and French actor Gérard Lanvin did an interview for the magazine Paris Match on the real tennis court. 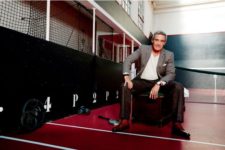 One of the specificities of the Jeu de Paume is that it is still a non-profit organization, whose main goal is to be managed in its members’ best interest, for example with the renovation or enhancement of the premises. Since 2012, one of the squash courts has been equipped with a side glass wall which allows spectators to watch matches while seating in the lounge or at the bar. The association also hosts prestigious tournaments and events, for the great pleasure of its members: especially the squash Open de Paris IG, which is part of the PSA World Tour and whose prize money has been constantly increasing. Last May, England’s Chris Simpson (world number #21) won the fourth edition ($25,000). “When I said to my coach that I was going to play a tournament in Paris, he said after his victory, it was obvious for him that it was gonna be held in the Jeu de Paume, as if there were no other club in the city! I can’t wait to come back and take a picture next to the wall with my name on it.”

Women also are in the spotlight thanks to the Prix Jones Day national tournament (unfortunately cancelled last year because of the terrorist attacks in Paris on the 13th of November). The third edition will take place from the 4th to the 6th of November, and it is likely that some members of the French squash team will attend. Three weeks later, they will start their WWTC campaign on the courts of the Jeu de Paume (Monday, 28th of November 28 at 6 pm). Overall, ten fixtures will be played at the club on the two opening days of the competition.

*The European Club Championships were held in Paris in 1994. 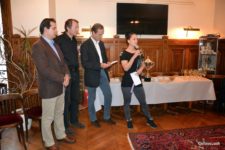 The Women’s World Team Championship is a unique event. It was obvious for the Jeu de Paume to apply to be one of the co-hosts, and we are delighted to have been chosen. Our club has had a long history of organizing big events, for example the Open de Paris Perrier at the end of the 80s (with a $60,000 prize money and won twice by Jansher Khan), and the Open de Paris IG in the last 4 years ($25,000 in 2016). We have about 300 members, most of them being men but we’ve been willing to increase the number of women for a few years: we have 2 women’s teams in the critérium Île-de-France and we’ve organized a women’s national tournament for several years, called the Prix Jones Day (this year’s tournament will take place on November the 5th and 6th). We are proud to host this world championship in the oldest squash club in France, and we hope that our unique setting will bring some added value to the event.

Share
Previous CAMILLE SERME OVER THE MOON
Next INSIDE THE TEAMS, EPISODE 1: THE DUTCH GIRLS ON THE ROAD TO PARIS