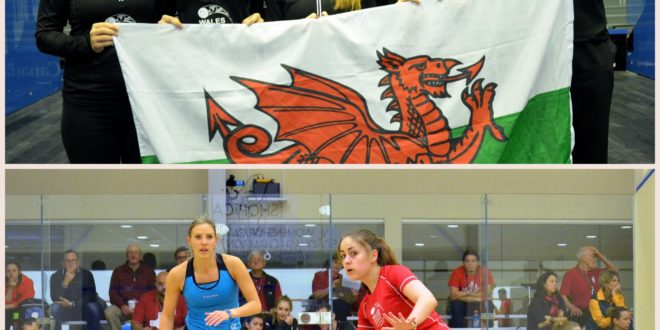 The Women’s World Team Championship will start in Paris in two weeks. We continue our presentation with a young team looking to extend their recent progress. To achieve their goal, Wales can count on their number 1 Tesni Evans, one of the rising stars on the women’s tour.

With Ireland and Scotland not featuring in France, there will only be two British teams in the 2016 WWTC. Although their ambitions will not be as high as title holders England, Wales will certainly be hoping to leave their mark this year. This young team (less than 24 year old in average) has been constantly improving in the last events: 15th in France in 2012 (first participation since 2000) and 9th two years ago, after beating teams like Canada or New Zealand. The Welsh girls even came close to a first European medal since 1988 last May in Poland, narrowly losing to Netherlands in the 3rd place playoff. These good results have been strongly related to the rise of their number 1 Tesni Evans. “Tez” (her nickname on the tour) certainly likes playing for her country: she scored her biggest wins in team matches, beating England’s Laura Massaro and Alison Waters in the last couple of years. “Yes we have been doing really well in the recent team events, she said to us. I think we all sort of raised our game because we want to do well as a nation, and that showed in our results. We were so close to a bronze medal in the Europeans, and the last WWTC in Canada, we really enjoyed it and we were really happy to finish 9th. Our goal for this year’s event is definitely top 8. There are a lot of good teams and I am sure some very close matches to be played but we would love to achieve that!”

Evans will arrive full of confidence in Paris, having had one the best results of her career in the Wadi Degla Open last week (first semi-final in a $50,000 event). “For some reason I seem to enjoy playing in Egypt. I don‘t know if I have an Egyptian style of play (which was suggested by the SquashTV commentators …), but my mindset when I am playing them is just that you know how good they all are and that it is going to be tough. So I just try to enjoy it, stay relaxed and see where it goes from there, and hope it pays off!” This result was particularly satisfying for her after a long string of very close defeats against higher ranked players. “It’s been tough to lose so many five game matches, especially in the first round of the big events. But I can’t complain because in all of them I’ve played well, I just haven’t been able to convert them into a win. All my opponents (Nicol David, Nour El Tayeb, Omenya Abdel Kawy, Rachael Grinham, Amanda Sobhy and Emily Whitlock) were top players so I couldn’t be too disappointed!  I definitely think these matches have helped me because every time I have stepped on court, I didn’t want that to happen to me again!” 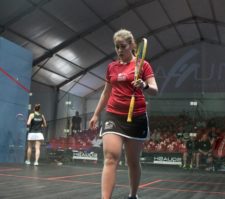 Tesni Evans’ interview was made before Deon Saffery’s withdrawal was announced. Saffery had been part of the squad in the last 10 team events and her absence is a serious blow for Wales’ ambitions. Welsh number 2 hasn’t played since the European Team Championship in May due to injury and wasn’t able to recover in time. She is replaced by Nia Teifi Davies.