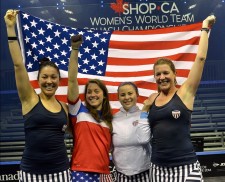 Pool rounds continued on day two at White Oaks, with some crunch matches and some quarter-final spots – the top two teams in each poll progress to the last eight- likely to be settled.  In the end, as yesterday, all the seeded teams won.

The morning session again featured six matches, with England, USA, Egypt, Australia, New Zealand and Malaysia all completing 3-0 wins. In the afternoon Hong Kong and France both won 3-0 to stay on course in Pool D.

To finish the day six more matches at 6pm, including Canada v USA on the glass court where, in front of a noisy crowd the USA won 3-0, although the Canadians made the Americans work hard in all three matches.

Also 3-0 winners were Egypt, Mexico and Germany.  Ireland were already 2-0 up when Colombia took the final match to make it 2-1, and Wales looked to be taking Australia to a decider before Rachael Grinham came from 0-2 down to deny Tesni Evans and give Australia a 2-0 lead which they finished off 3-0.

We’ll have a preview of the state of play in each Pool ready for tomorrow’s final group matches. 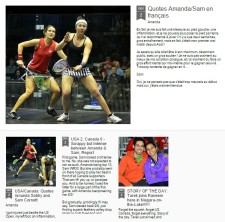 Lots of stories, reports, quotes from today on the BLOG

A selection of today’s photos – lots more in the Gallery …