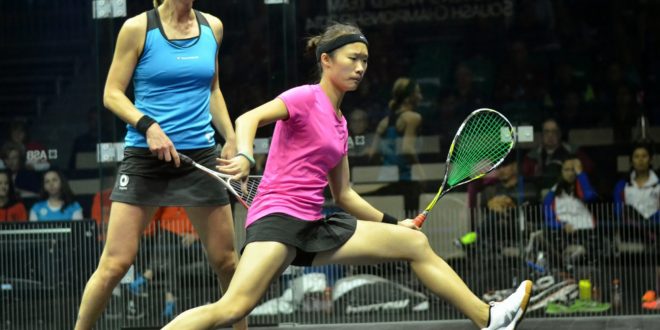 After an exciting day yesterday at Palais des Sports Robert Charpentier, there are only four teams left in the main draw at the Women’s World Team Championship. Three of them were already there two years ago in Canada but it’s a first for the host country France. Can they produce a HUGE upset against Egypt? Quick preview of the semi-finals.

The two countries met at the same stage two years ago and England had won 2-1. Laura Massaro is 9-4 in the H2H against Annie Au. The English number 1 has won their last 5 meetings but they haven’t played each other for 2 years. They had some mixed fortunes in the last couple of days: Massaro lost to Sobhy but came back very strong against King yesterday, while Annie Au played very well against Serme but was overplayed by David in the quarters. The world number 4 is expected to win this match but Au is an expert at making her opponents not play their best and cannot be ruled out. The number 3 string match could also be the same than two years ago, between Sarah-Jane Perry and Tong Tsz-Wing (who was very solid yesterday). The 2014 WWTC was their only encounter and the English girl had won the decider in 4 games. 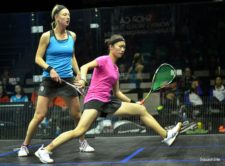 Finally, there could also be a repeat between Alison Waters and Joey Chan. The Hong Kong number 2 had created a big upset beating Waters two years ago, after losing their seven previous meetings. She has shown some great form this week, while the English girl lost 3-0 to Evans, so it could be a very interesting match should it come to a decider.

After their dream night last night at the Palais des Sports, can the French ladies produce what would be one of the biggest upsets in WWTC history? If they want to have the slightest chance, they obviously need their leader Camille Serme to win, whether she plays Nour El Sherbini or Nouran Gohar (Shabana could decide to rest the world number 1 after her tough match vs Sobhy yesterday). Serme’s H2H is 1-3 against Gohar and 6-6 against El Sherbini. 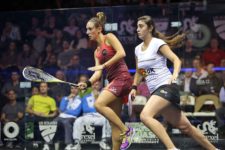 But even if France was 1-0 after the first string match, they’ll still need something extraordinary to happen: either Coline Aumard to beat Nouran Gohar or Raneem El Welily, or Laura Pomportes to win against Raneem El Welily or Omneya Abdel Kawy. Which they have of course never done, but what better stage than a World Team Championship semi-final at home to start? Coline will certainly remember than she challenged Gohar in the 2015 World Championship, losing in 4 games and 50 mns. But the double World Junior Champion is not the same player than she was then.