RULES OF THE GAME

THE GAME (Diagram B) 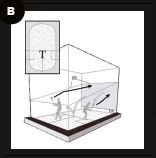 Each player strikes the ball in turn.
The ball must hit the front wall either directly or indirectly.
The ball is not allowed to bounce on the ground more than once between strikes.
Fixed limits are: top lines and the line above the tin.
A ball hitting either one of those lines is out.
Players attempt to  get back to the T between each strike 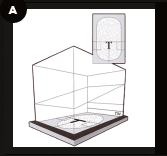 Players must:
Try to get into position at the T after each strike.
Send their opponent as far from the T as possible by varying the length and width of each shot.
Keep their eyes on the ball at all times.
Never strike the ball when there is  a risk of hitting their opponent. 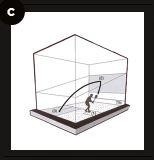 There is only one service strike.
Markings used for the service  : the middle line on the front wall and the lines on the ground are only used for the service.
The server must send the ball into the opposite back rectangle.
(3) The ball must hit the front wall directly between the middle and top lines (2).
When serving, the server must have at least one foot in the service box.
After winning a rally, the server then uses the alternate service box.
After winning a rally, the opponent becomes server and chooses his service box.


After striking the ball, the player must make every effort to get out of the way.
The player must make every effort to play the ball.
The specificity of squash lies in that both players share the same space.
If a player risks hitting his opponent with the ball or his racket during a rally, he must stop playing and claim a let.
The referee, in view of both principles, determines whether to grant the “Let”,
refuse it or grant a “Stroke” (winning point of the rally). 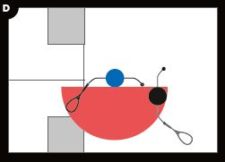 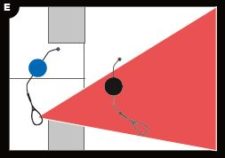 The player to serve first is selected by the spin of a racket.
The player winning a rally scores one point.
A match is three winning games.
A game is played to 11 straight points. 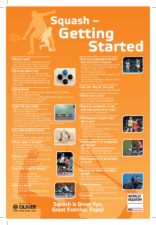