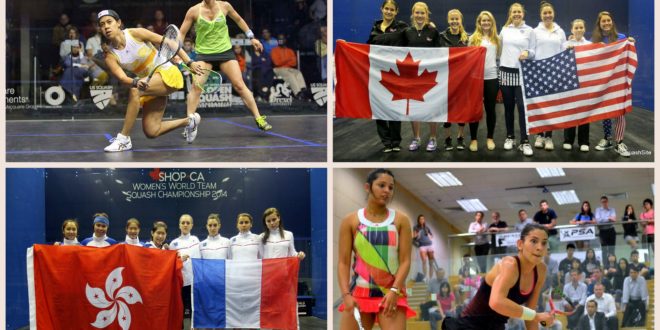 After the teams on Saturday, pool line-ups and seedings for the 2016 Women’s World Team Squash Championship have been announced earlier today. Unsurprisingly, Egypt – boasting three players in the top 4 – and title holders England are seeded 1 and 2. Here is a quick glance at the pools and the matches to watch for.

Due to the absence of their number 2 Deon Saffery, Wales’ seeding was changed from 11 to 14 and this led to a few modifications in the pool line-ups. See changes in red below.

Egypt are obviously huge favourites to top that group. New Zealand and India underperformed two years ago due to the absence of a key player (Joelle King and Dipika Pillikal, picture above). Both countries will be eager to make the quarters and the clash between the two nations will be one of the highlights of the pool stage.

Japan is replaced by Mexico.

England have made 11 finals in a row since 1994 and will be looking to extend this extraordinary streak. USA and neighbours Canada already met at this stage in 2014, the Americans coming out on top to make the quarters.

Mexico is replaced by Wales. 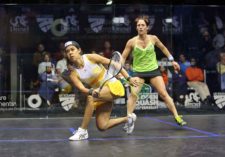 Malaysia and Nicol David produced a huge upset two years ago against Egypt in the semi-finals. If they want to repeat this result, they’ll have to beat a solid-looking Australian team. David has won her last 30 matches in the WWTC and the last player to beat her was … Australia’s Rachael Grinham in 2004!

Wales is replaced by Netherlands.

Same set-up than two years ago for Hong Kong China and France, seeded 4 and 5 and playing in a 5 team pool. Annie Au and her teammates won in Canada after a very close tie and their encounter on the glass court on Wednesday will be the highlight of the pool stage for the home crowd.

Netherlands are replaced by Japan.

Quarter-finals line-ups if pool results are according to seedings:

Our team presentation is underway, click on the flags to read them (or go to The Competition > Teams)