The world’s top women squash players, competing in the SHOP.CA WSF Women’s World Team Squash Championship in Canada this week, have the ‘opportunity and responsibility’ to see their sport join the Olympic programme, according to former IOC Vice President Dick Pound.

The one-time nationally-ranked Canadian squash player was speaking at the Opening Ceremony of the 19th staging of the biennial World Squash Federation championship at White Oaks Conference Resort & Spa in Niagara-on-the-Lake in Ontario, which gets underway today before reaching its final on Saturday (6 December). “I played squash for many years with much enthusiasm and much less skill,” Pound (pictured above) told the players from 20 nations – including all of the world’s top ten – who will compete for the 2014 women’s world team title. “It is a wonderful game and I congratulate all of you for rising to a level that brings you to the world championship representing your country.

“As I look around the room at the many delegates who will participate in these championships, I cannot help thinking, as a member of the International Olympic Committee, that squash should be in the Olympic Games.

“I will do my best to make that dream a reality. Let’s say that if that happens, it will be a direct result of the high level of the women’s game, not those of the men, which will make the difference. So you have both opportunity and responsibility.

“The IOC will be meeting in Monaco next week and I am confident that we will abolish the rule against an artificial limit of 28 sports – and I cannot think of a better example of fitness, skill, strategy and fair play than squash.

“Your play here this week, under these splendid conditions, will help those of us who support squash to make international progress in the off-the-court arena.

“Carry your hopes with you – and bring back good memories of your visit to Canada,” concluded Pound.

Michael Wakil, owner of the unique White Oaks Conference Resort & Spa which boasts not only 10 squash courts (including an all-glass showcourt) but also 200 rooms which provide accommodation for all the event participants, welcomed the delegates – remarking that the occasion was the latest ‘first’ for the venue which, after 30 years, was now hosting its first world championship. 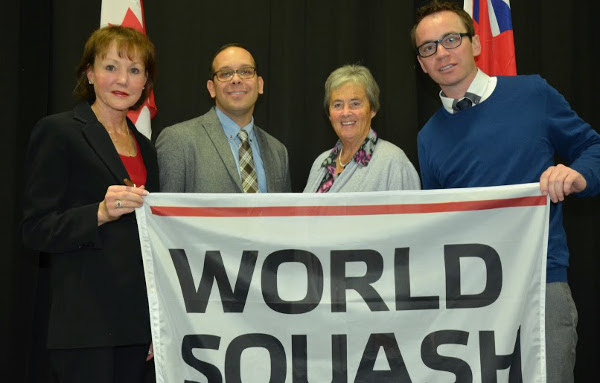 Dick Pound has been named as one of Time Magazine’s 100 most influential people in the world for his relentless efforts to rid sport of performance-enhancing drugs. His career has touched nearly all aspects of the Olympic Games and the Olympic Movement, and he has been a force for change and growth in many of the roles he has assumed over the years. He has been inducted into Canada’s Sports Hall of Fame for his achievements in sports, both as an executive and as an athlete. As an athlete, he was a double Olympic swimming finalist at the 1960 Olympic Games, and captured four medals (one gold, two silver, one bronze) at the 1962 Commonwealth Games.