The Mexican team is a combination of experience and youth. They will be led by 35-year old Samantha Teran, semi-finalist of the World Championship in 2011. Nayelli Hernandez, who now works as a coach in the US alongside former world number 1 Natalie Grainger, won the Pan American Games Doubles Championship with Teran. The team is completed by Diana Garcia and new addition 20 year-old Sarah Lopez. 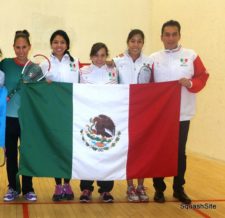 ***Breaking news: Mexico will have to do without their number 1 Samantha Teran because of injury. She is replaced by 15 year-old Dina Anguiano Gomez, who will be the youngest player in the tournament.