President of the WSF 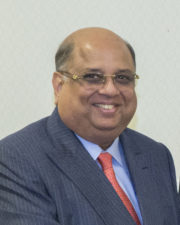 Welcome by the President of the WSF, Mr N. Ramachandran

I am delighted to extend a warm welcome to all attending the 20th WSF Women’s World Team Championship being held in France again after the great staging in Nimes in 2012.

Paris is one of the great cities of the world, and the players and officials who are attending and participating will not only experience a great event staged by the French Squash Federation, but their time in the French capital too.

Holders England will face a tough task to hold onto the title against the very strong Egyptian squad, but of course France led by Camille Serme will surely be helped by home support.

Our sincere thanks to the French Squash Federation under the leadership of M. Jacques Fontaine for bringing the Championship back to France, and to all involved in the Federation, Clubs, Centre and supporters for their hard work in bringing the event to fruition.

Best wishes for a successful and enjoyable week in Paris.

Messages of the following organizators will be published soon.