MASTERS OF THE GAME

934 entrants spread over 19 age categories, and therefore several thousands of matches played: the World Masters Championships held last week in South Africa were a major event, during which nine women were crowned.

Some of them have made the history of the WWTC, the most famous of all undoubtedly being Sarah Fitz-Gerald. The Australian added another world title to her impressive collection (5 in individuals, 7 WWTC and 3 now in Masters), all her matches lasting less than 20 minutes. The former world # 1, who’s often competed with men in the past, has not lost against a woman since 1999! “It was touch and go for a while,” said the 47-year-old from Melbourne after the finals. “I had a calf injury which almost stopped me entering, so I feel really humble that I made it here and still came through to win another title. There’s always pressure when you’re playing for a world title, and it’s a bit of a reality check in the Masters, everyone slows down, reactions aren’t as good, and they play drops and lobs!”

Another former world # 1 came out victorious on the courts of the Wanderers Squash Club. Natalie Grainger has a peculiar story since she was born in England, raised in South Africa and has represented the two countries as well as the United States she is now a citizen of. She may never have been world champion on the professional tour (runner-up in 2002 to … Fitz-Gerald) but she won a second over 35 title in Johannesburg. It was not easy though, as England’s Lauren Briggs put up a good fight in the finals. “There’s nothing like winning at home, even if it is my home away from home these days…”, said Grainger after her victory. Samantha Herbert was the sole female player to win the gold medal for the host country – in the over 40 category – after a huge battle with England’s Anlenn Murray (11-9 in the 5th game after 51 minutes of play). “This is the biggest crowd I’ve ever played in front, she said, and it’s mainly South African which makes it even more special.” Mylene de Muylder became the first French woman to win a World Masters title, after notably beating former over 35 and over 40 world champion Angie Clifton Parks in the quarters. While England‘s Julie Field (over 60) and Ann Manley (over 70) added a third title to their résumé, it was a first for their fellow countrywoman Karen Hume in the over 55, who came back from a two-game deficit to beat another English lady, Jill Campion. Besides Fitz-Gerald, there was another Australian champion with Marylin Kennedy in the over 65. Finally, Ireland’s Barbara Sanderson continued her impressive run of success with a fifth World Masters title in the over 75. 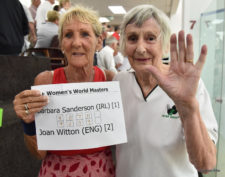 The next World Masters Championships will take place at the beginning of August 2018 in Charlottesville (VA), United States.

Share
Previous STORIES OF WOMEN
Next CAMILLE SERME OVER THE MOON