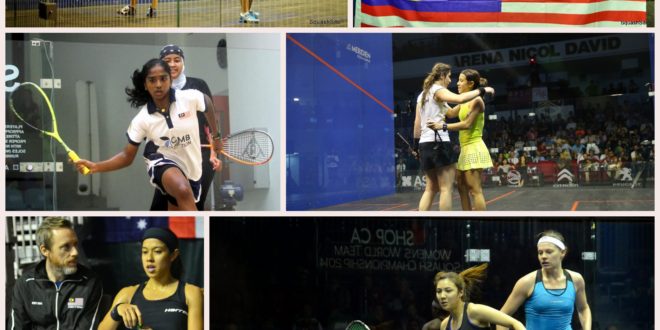 INSIDE THE TEAMS, EPISODE 7: MALAYSIA AND NICOL DAVID ON A SEARCH FOR GOLD

We are only 9 days away from the start of the Women’s World Team Championship in Paris. Our team presentation continues today with ever-improving Malaysia. National icon Nicol David and her teammates reached the finals two years ago in Canada but can they do even better in Paris?

Can the Malaysian team keep on doing better and better? Led by legend Nicol David, they have been a model of consistency with five consecutive top 3 finishes since 2006. After failing to go beyond the semi-finals four times in a row, the Malaysians produced a huge performance in 2014 to beat title holders and seed number 1 Egypt (before losing to England in the finals). After David beat Raneem El-Welily, Low Wee Wern played the best squash of her career to defeat Nour El Sherbini in a marathon match (11-9 in the fifth after 88 minutes of play). “I am just so pleased for Nicol, Wee Wern had said gracefully just after the victory. For all these years, she has won for us – and the rest of the team have let her down (Malaysia had always lost 2-1 in the semis, David winning her match every time). Now we have finally done it for her.”

“Of course, we are all eager to win the gold medal and try to improve on our best finish from the last tournament in Canada, says team coach Peter Genever. That is the nature of sport to improve over time and achieve the short and long term goals we have set.” The challenge will be tough. For the first time in a decade, Nicol David will not arrive in the WWTC as the world number 1. But she can take some confidence from her extraordinary winning streak in the event (30 matches in a row, her last loss being in 2004 against Australia’s Rachael Grinham, whom she should face in the pool stage). As far as her teammates go, Wee Wern has been struggling to get back to her best since her knee injury in 2015, but she says she is “definitely in better shape this time compared to last year.” On the other hand, Delia Arnold has had a breakthrough reaching the semis of the 2015 British Open, and has been a consistent member of the top 20 ever since. “The competition will be fierce in France, Genever continues, and Egypt with all the squad members in the top ten in the world are obviously the team to beat. But the improvement in all the countries is evident and every new edition of the event becomes more and more competitive which is great for squash.”

To reach their goals, Malaysia can also rely on the experience of their players in the event. “Not only the experience from performing well, Genever told us, but also we have an excellent team spirit. The players enjoy each other’s company and that’s very important in major team events.” In fact, it’ll be the fifth consecutive time that David, Wee Wern and Arnold feature together in the WWTC. “They have raised their level in past WWTCs and I expect that to continue in France. The newest member of the team is Sivasangari Subramaniam who is making her debut. Sangari has had an excellent 2016 winning six PSA titles in Malaysia. She is as keen as the rest of the team to make a lasting impression on the big stage and will want to play every match.” The final preparatory event for the team will be the Malaysian Nationals at the National Squash Centre in Bukit Jalilrom from the 17th to 20th of November (which Nicol David opted not to play to focus on her preparation). “The players are all excited now as the WWTC comes into focus, Genever adds. Getting the players together at Nationals before departing for France will help further build the team spirit.”

***Breaking news: Delia Arnold won her second Malaysian Nationals in a row. She beat Low Wee Wern in straight games in the final.

She is certainly at the top of the greatest female squash players of all times shortlist. Nicol David’s résumé of titles and awards is beyond incredible and she keeps breaking records month after month (the last one being a 143-month unbroken run in the world top 5 established at the beginning of November). As a result she is considered as the biggest sports icon in the history of her country! We caught up with 8-time world champion a few weeks before the WWTC, one of the very few major titles she hasn’t won yet. 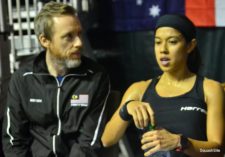 Hi Nicol. Let’s go back to the last WWTC in 2014 in Canada: after a few bronze medals, how important was it for Malaysian squash to upset Egypt and make the finals for the first time?

Nicol David: It was a huge milestone for us as a Malaysian team and we were truly overjoyed to achieve our best ever result to reach the finals. I was so proud to be part of a team that was fully committed and gave it everything to achieve this silver medal.

I’ve noticed your team has been together for quite some time. Besides the quality of the players, would you say that experience is a major factor behind the success of Malaysia in the WWTC?

N.D.: Our team with Low Wee Wern and Delia Arnold has grown in many ways throughout our experiences representing Malaysia for all these years with the World Teams. That certainly is a factor towards our success in 2014. We continue to encourage and support each other to bring out the best in ourselves, utilizing our strengths to take us forward. 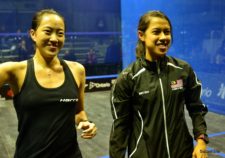 As far as you’re concerned, the WWTC is about the only title you haven’t won so far, what are your goals/hopes for this year’s event?

N.D.: The WWTC is always unpredictable because it is a completely different set up compared to playing on the professional tour. This makes it very exciting when this tournament comes around and for the Malaysian team, we’ll hope to work towards our seedings in this year’s WWTC. Everything else will be a bonus.


You’ve played this event since 2002 and are therefore kind of a “witness” of women’s squash. What’s your view on its evolution, from Sarah Fitz-Gerald to Nour El Sherbini?

N.D.: It’s certainly been a while! However, I’m really grateful I was able to be a witness of the greats in squash when I first started, to fully grasp how the game is played and learn from them. There have been changes in the women’s game externally with the scoring, tin change, players’ participation and technology of equipment that has created different styles of play into the women’s squash game today. It has encouraged a following of younger players to join the tour so we will see many new faces in this WWTC in France. 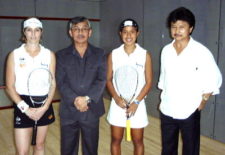 For a complete list of Nicol David’s achievements, see 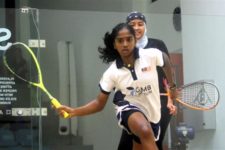