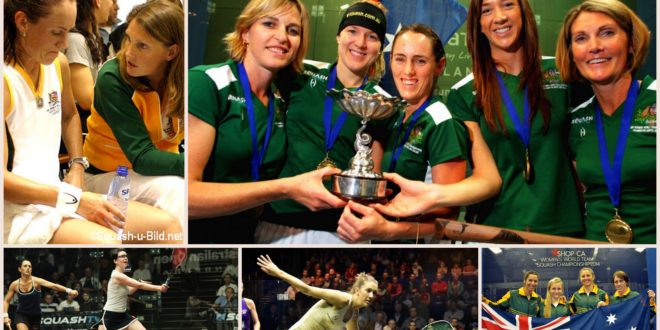 INSIDE THE TEAMS, EPISODE 2: AUSTRALIA – A MIXTURE OF EXPERIENCE AND YOUTH

While the squads for the Women’s World Team Championship will be officially published tomorrow, a few countries have already announced their line-up, such as Australia. Despite no longer being the most powerful nation in women’s squash – they hold the record for the highest number of WWTC titles – the Aussies will rely on a combination of experience and youth to try and break into the top 4 again.

A BIT OF HISTORY

Australia was the dominant force of women’s squash in the 90’s as well as early 2000’s. Michelle Martin, Sarah Fitz-Gerald and Carol Owens – all former world number 1 – won numerous World Opens, as well as 4 consecutive World Team Championships between 1992 and 1998 (with the help of former world number 2 Robyn Lambourne and Liz Irving). Despite Martin and Irving’s retirement (as well as Owens becoming a New-Zealander), the Aussie girls remained on top thanks to the emergence of the Grinham’s sisters, winning in 2002 and ’04. But with Rachael’s absence (due to a falling out with officials after the 2006 Commonwealth Games) and Natalie switching to Dutch nationality, they went through a difficult period, dropping out of top 4 for the first time in the history of the event (in 2006 and ’08). 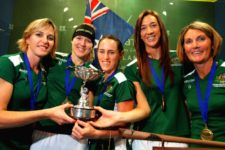 That’s when Sarah Fitz-Gerald decided to come out of retirement. “I put my name forward because I had been playing quite a lot – and well enough to earn a position in the team, she said to us (read full interview). I felt I had something to offer the Australian team to change that. It turns out we were fortunate enough to win that year… It was absolutely amazing to represent my country again and win another world team title after so many years away.” With Rachael Grinham back in the team, as well as Donna Urquhart and Kasey Brown, they beat England in the final in New-Zealand. After finishing fourth in France in 2012, Australia unsurprisingly struggled two years ago in Canada (7th), with Brown’s retirement and Urquhart’s serious injury not long before the event. Urquhart is back in the team alongside Rachael Grinham, as well as Christine Nunn and debutant Tamika Saxby. Although the competition will be fierce in Paris, they will surely hope to do improve their last result.

A few weeks before the event, we had a chat with Australia’s coach Michelle Martin (former world number 1, world champion and WWTC winner – both as a player and as a coach).

Hi Michelle. Could you tell us what your team’s preparation will be like before the event?

Michelle Martin: The girls are preparing in their own way. They are currently playing events around the world and we will come together a few days prior to the event in France (Rachael Grinham and Donna Urquhart will play in the Monte Carlo Open the week before).

You’ve won the WWTC numerous times, as a player and as a coach. I suppose this is an event you particularly like, don’t you?

M. M.: As a player I was always proud to represent my country. Australia was in a very strong era and our team played well together. As a coach it is very different, since you have no control over the players in their preparation. They all are individual players with their own coaches and are well versed in preparing for international competition. My role is really to manage the team to the best possible position we can achieve, and assist the girls in their match play where possible (in the Dutch team presentation, former Australia’s player Natalie Grinham – now player/team manager for Netherlands – praised Michelle Martin’s management, saying she was “the best team coach/manager I’ve had. She had good rules, which made sure we were professional yet able to enjoy every moment. I try to do the same thing with the Dutch team.”)

Australia finished seventh two years ago, which is one of your lowest recent results. Have you set up a clear goal in terms of final ranking for this year’s event?

M. M.: As a team the players are all trying their hardest to achieve the best outcome for each match. The overall final ranking will be a picture of our performance during the week. We are always trying to achieve our best possible result.

What is the current situation of women’s squash in Australia? Your country was the dominant force in the 90’s, do you see some promising youngsters coming up?

M. M.: Australian Squash has changed in dynamics since I was at the top. We have a lot of obstacles facing our sport in the country – lack of facilities being one – and this impacts the overall base of players available. Like every country in most sports, we all go through highs and lows. We are endeavouring to build for our future teams with our younger players like Tamika Saxby breaking into the team for the first time. We hope to build on and develop players underneath her to create strength in our system once again. 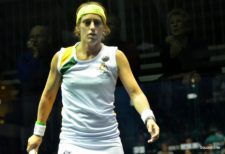 Share
Previous INTERVIEW WITH A SQUASH LEGEND: SARAH-FITZ-GERALD
Next INSIDE THE TEAMS, EPISODE 3: WALES WANT TO GO ONE STEP FURTHER