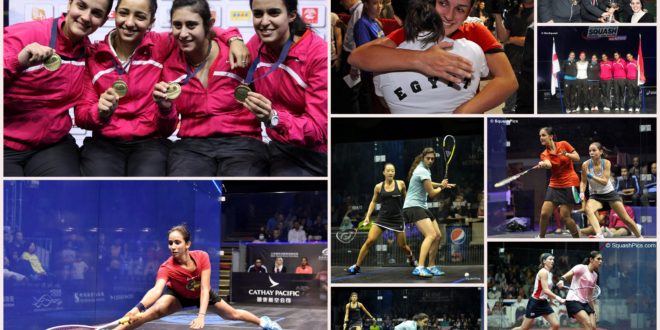 INSIDE THE TEAMS, EPISODE 13: WHO CAN STOP EGYPT?

The Women’s World Team Championship starts tomorrow in Paris with the opening ceremony. Today we end the presentation of the teams who will be competing for the world title with the favourites, Egypt. Raneem El Welily and her teammates were upset by Malaysia two years ago. But since then they have asserted even more their dominance on women’s squash, so much that they now boast three players in the world top 4. Is this dream team unbeatable?

There is a single fact that shows the strength of that team more than anything else. Any country would be happy to have Nour El Tayeb in their squad. Former World Junior Champion had played the last three WWTCs, but she won’t have the opportunity to extend her 13-match winning streak in the event. She can blame both a shoulder injury at the end of 2015 and the meteoric rise of Nouran Gohar, who became the youngest player ever to win a World Series event in Hong Kong back in August. 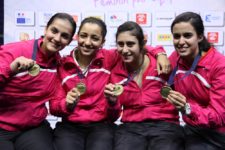 Raneem El Welily and Omneya Abdel Kawy will be playing their seventh WWTC together. In fact, Kawy will be featuring for the tenth time in an event she’s been playing since the age of 13! They were joined in 2012 by current world number 1 Nour El Sherbini, and Gohar is therefore the latest addition. She has won the World Teams twice in the juniors and it’ll be her first cap at the senior level. “Of course I am very happy to have been selected, she said to us. Having the opportunity to represent my country, especially in a senior event, is a very special feeling and it always makes me proud.” There are many ways to illustrate the current stranglehold of Egypt on women’s squash, besides the world rankings. For example, they had two or more players in the semi-finals in the last 10 World Series events. This dominance becomes almost incredible in the junior categories: Egypt won the last 5 World Junior Team Championships and 11 of the 12 last individual events. In the light of this, everyone expects them to win in Paris. Will this pressure be difficult to handle? “I think it’s more of a bonus than a pressure, Gohar adds. Many people are expecting great results from us, but we will use it as a positive boost to do our best during the event. As far as I am concerned, I really enjoy this type of expectations. It makes me perform better and brings the best out of me.”

As if they needed extra help, they will have Amr Shabana – former world number 1 and 4-time world champion – in their corner in Paris. But although they look very hard to beat on paper, the Egyptian girls are not taking anything for granted and will remember that were also seeded 1 when they lost to Malaysia two years ago (although it wasn’t such a big upset considering the individual rankings at the time). “England is the team that holds the title and they have a strong squad, Gohar concludes. But there is also Malaysia, France, and many others. It won’t be an easy competition, that’s for sure.”

WILL THEY MEET AGAIN? 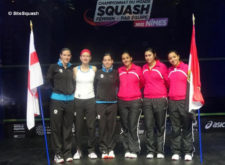 For a long time the Women’s World Team Championships was all about the England versus Australia rivalry: the two countries have met in 13 of the 19 finals. But the Aussies have been recently replaced by Egypt, who made the top 4 three times in a row before reaching their first finals in 2006. Here is a look back at the England vs. Egypt WWTC finals, with Raneem El Welily.

Omnenya Abdel Kawy had to retire against Tania Bailey therefore the key match was Vicky Botwright’s win over Engy Kheirallah. The English player came back from 1-2 down to win in 5 games after a marathon match (77 minutes).

“The first time I actually participated in the Women’s World Team Championship was in 2004. I was number 4 in the squad and therefore didn’t play many matches, but I learned a lot. So moving to number 3 in 2006 was a big step. Omneya and Engy were such great examples for the sport in Egypt, and to be in the team with them was very exciting for me. It was also the very first time Egypt made the finals, so that was a big achievement for us.”

This final was considered at the time as one of the most dramatic climaxes of the Women’s World Team Championship, and was played in front of a packed crowd of very noisy Egyptian fans. English players were all higher ranked than their opponents but Omneya Abdel Kawy opened proceedings beating Jenny Duncalf in straight games. Then Laura Lengthorn-Massaro silenced the crowd beating Raneem El Welily (who was only 19 years old) in 5 games. The decider was a real drama, England’s second string Alison Waters twice taking the lead, only for Engy Kheirallah to draw level. The Egyptian faced a match-ball at 9-10 in the fifth but won the point on a stroke, before moving onto her own match-ball at 11-10 – which she won when a ball off the back wall from Waters failed to reach the front wall. There was immediate pandemonium around the glistening court as Egyptians jumped up and down, screaming with joy.

“It was different that time, we were playing in Egypt and everybody was there to support us: our families, the squash family and even people who had nothing to do with the sport. The crowd was very excited and may not have been very fair at crucial moments. But nobody expected Egypt to beat England for the first time. It was very big and people went insane. Omneya had won the first match, then I remember losing in five games to Laura and feeling really bad not to have managed to win. It was then Engy’s turn to go on court to play the deciding match. She lost the first game so comprehensively that I thought we had lost. But I remember she made the biggest comeback of her career and played her best squash ever. It’s probably one of my best sporting memories.”

Like four years ago, this final went to the wire. Second seeds Egypt recovered from a match down to upset favourites England and win the first WWTC held in France. England got off to a good start when Alison Waters beat Nour El Sherbini in 5 games in the first ever meeting between the two world top ten players. In the top string duel, Laura Massaro took the early lead but Raneem El Welily was able to take her revenge from 2008 and closed the match in 4 games including two tie-breaks. The pattern of the first two matches was repeated in the decider when Jenny Duncalf again put England ahead by winning the first game against Omneya Abdel Kawy. But her long-time rival moved ahead by taking the next two games. Duncalf fought hard to draw level – and in the decider won five points in a row to move 7-4 up. But Abdel Kawy produced a remarkable effort to win 11-8 victory and bring a second world title to her country. 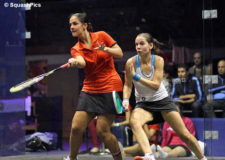 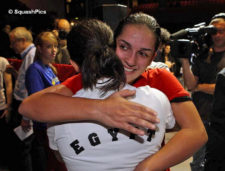 “2012 is another one of my best sporting memories. I remember we were 1-0 down in matches when I got on court and I was losing at the beginning. So I told myself to give everything I had. I decided I would do absolutely everything I could before getting off court. So that at least I wouldn’t let anyone down. My matches with Laura are usually close in scores so this was no surprise, but my win meant that we were now were tied at 1-1. The last deciding match was epic, so close all the way to the end, but we were very happy that Omneya managed to win. She was our hero that day 🙂”

FROM THE OTHER SIDE OF THE MIRROR: ALISON WATERS

“In three out of the four World Teams I have been a part of, we have played Egypt in the final… My first ever World Team Championship was in Edmonton in 2006 and we beat them. It was a special moment to win my first title with the team. We lost to them in Cairo two years later in an exciting and nerve wrecking final. I lost the deciding rubber 12-10 in the fifth, so it was an emotional moment personally and a tough loss for everyone. Then in 2012 we lost 2-1. All three matches had been exciting and full of drama. This sums up the event for me: matches are normally full of excitement, with lots of tense moments and great atmospheres. It certainly makes for an entertaining week.” 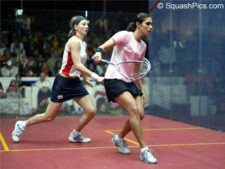 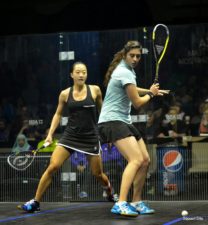