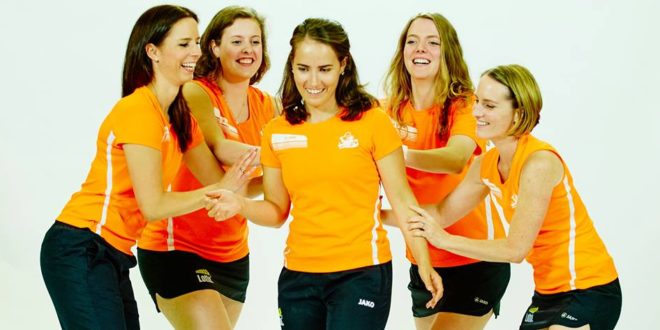 INSIDE THE TEAMS, EPISODE 1: THE DUTCH GIRLS ON THE ROAD TO PARIS

We are now exactly four weeks away from the start of the Women’s World Team Championship. Today we start our presentation of the teams who will be competing in Paris, with the Netherlands. For a few reasons she has only taken part in the event four times, but Natalie Grinham is without a doubt one of the iconic figures of the modern game. We caught up with the 38 year-old, who walked us through her team’s “Road to Paris”.

They will not be title contenders in a month in France, but the Dutch girls surely got noticed with their “Road to Paris” video for their crowd funding campaign. Former world number 2 Natalie Grinham talked to us in details about this journey: “We found out at the European Team Championship earlier this year that the Dutch bond (Squash Federation) had not budgeted to send us to the World Championship, Grinham said to us, so the only way we could go was by raising the funds ourselves. The only problem was that the entry fee had to be paid within a couple of weeks. I was able to secure a loan to pay it and then we started organising the crowd funding campaign. We drew a budget based on the 1035 km return distance from Amsterdam to Paris, with a €10/km rate. We then did the photo and video shoot with Almere Media productions and got a logo for our campaign and supporter shirts by Zeeman en Burger. Dunlop supplied products for our fan day and offered us a good deal for our give backs.

Before we officially started, we received a €1000 sponsoring from GC biotech. The preparation lasted three months before we launched the campaign on September 4th, with a fan day that included a tournament at no charge, just a donation. A month ago, we had 299 km to go when we were contacted by Jasno. They said they were willing to complete the budget, so they became our main sponsor. Let’s not forget J & C sportrevalidatie who is providing us with a physio for the Championship. So we have done better than we could have hoped for.” There are five girls featuring in the video and all of them will be going to Paris. “The four official squad members are Milou van der Heijden, Tessa Ter Sluis, Milja Dorenbos and I, Grinham explains. But we raised funds for five girls in case someone got injured. Since we’ve all contributed, it is only fair we all go (they will be joined by reserve Sanne Veldkamp).” While some countries will be travelling with a large staff, Grinham will be multitasking, being a key player but also the team’s coach. “I’ve held this position since 2015 but it was only during the European Team Championships at that time, so it wasn’t really weird to play against my teammates at the Dutch Nationals. But since the ETC this year I’ve been working more with Milou, so now I find it quite strange to be on court with her in a competition.”

Although she turned professional more than twenty years ago, the younger of the Grinham’s sisters has only been taken part in 4 WWTCs. The first reason is that she switched nationality from Australia to Netherlands in 2008, two years after marrying former Dutch player Tommy Berden (she last represented Australia at the 2006 Commonwealth Games where she won three gold medals, and the WSF rules state that a player must wait for three years before becoming eligible to represent a different country). Before that, she had won the event in 2002 and 2004, twice with her sister Rachael on her side. 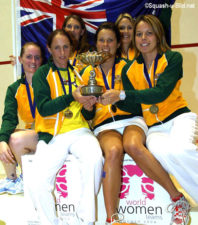 “Both times were amazing but in different ways. 2004 in Amsterdam is still my favourite team event I played. We had such a great team vibe. Michelle Martin (former world #1 and three time world champion) was the best team coach/manager I’ve had. She had good rules, which made sure we were professional yet able to enjoy every moment. I try to do the same thing with the Dutch team.” The second reason is that Natalie gave birth to her sons Kieran and Ryan in 2010 and 2014 and therefore missed the event those years. While more and more sportswomen resume their professional career after the birth of their first child, competing at the highest level with two kids is certainly rarer. “It’s not common indeed, but I think Australian squash legend Vicki Cardwell did better than me (she came back to world #12 at 40 years old after giving birth twice). What’s more difficult, being a squash professional player or a mum with two kids? To be honest I’m yet to find out how it is just to be a mum. Doing both at the same time has definitely been a challenge. This past year has been more difficult because Kieran turned six and in Netherlands it is mandatory for kids go to school between 5 and 18 years old. My husband has been travelling a lot for his job at the PSA (he is Chief Commercial Officer), therefore it’s becoming more and more difficult for me to go away for tournaments. So I just try to play my favourite ones.” 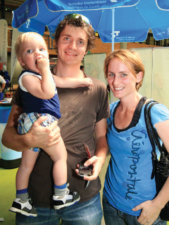 Netherlands have had some success in team events in the past, especially in the European Team Championship where they made the finals nine times in a row between 2003 and 2011 (they came fourth twice in the WWTC in 1992 and 2006). The Dutch team caused a huge upset in 2010 when they beat England in the semis in Aix-en-Provence, France (this is still the only time the English ladies haven’t won in 39 events). Although Grinham wasn’t featuring that year because she was about to give birth to her first son, she won two silver medals in 2009 and 2011 alongside former world number 1 and world champion Vanessa Atkinson (they have never played in the WWTC together). With Atkinson retiring in 2011 and Grinham no longer being a top 10 player, times had obviously been more difficult after that but the tables have turned again recently. “It’s a shame we dropped to European Division 2 in 2014. I was unable to play as I was very pregnant, and Milou was injured which seriously weakened the team. In 2015 we won Division 2 with a team which was basically as strong as the one who clinched the bronze medal a few months ago. It is a system that is definitely not perfect! I believe the Division a given team plays in should not be entirely based on the result from the previous year, especially because the absence of a single player can make a huge difference for a majority of them. Milou is our highest ranked touring professional so it’s important she can get some experience competing against those top girls in Division 1.” Although Grinham is now behind her teammate in the world rankings, she will play in number 1 in Paris. “I’ll continue to play as long as I am the same standard as the number 3 in the team, she says.” 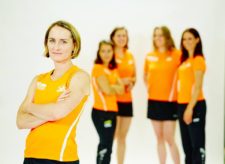 25 years old … #40 in the world (October 2016) … Highest world ranking 38 in June 2015 … Won 5 titles on the professional tour … Bronze medallist in the 2016 European Team Championship … Dutch Nationals champion in 2014 and 2015 (beating Natalie Grinham in the finals) … Played for Netherlands in the 2010 and 2012 Women’s World Team Championships … Just won the International du Val de Marne (about 20 miles away from the WWTC venues), a tournament Grinham had also won last year! 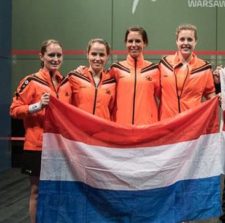