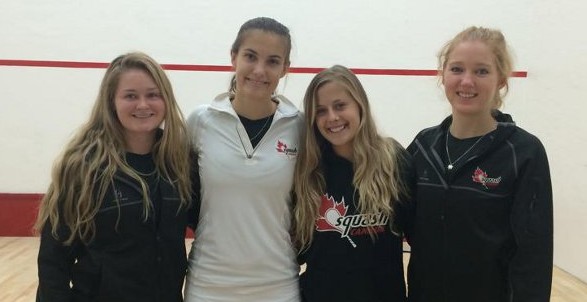 Canada will be fielding one of its youngest-ever teams as the hosts bid for success in next month’s SHOP.CA WSF Women’s World Team Squash Championship in Ontario.

The 11th seeds will be one of 20 nations represented – with all the world’s top ten players in action – in the 19th staging of the biennial World Squash Federation championship at White Oaks Conference Resort & Spa inNiagara-on-the-Lake from 1-6 December.

“Our pool is TOUGH!” exclaimed team coach Melanie Jans, the former world No25 and one of Canada’s greatest female players.

Pool C includes third seeds Malaysia, bronze medallists in the four previous championships and led by world number one Nicol David, together with North American rivals USA, the No6 seeds, and Mexico and event newcomers Guatemala.

“Malaysia may be out of our depth but we should be OK against Guatemala,” said Jans.  “We also have the US and Mexico to contend with.  I think we have a chance against these teams!”

The Canadian squad was selected after Team Trials.  Captain Samantha Cornett, the 23-year-old world No30 and the country’s two-time champion making her third appearance in the championship, will be supported byDanielle Letourneau, 21; Nikki Todd, 24; and 20-year-old Hollie Naughton.

“The team trials were close because we have good depth,” added Jans, the Squash Director at Club Meadowvale in Mississauga.  “The fifth and sixth player could have made the team on any given day.

“We’ve had a training camp and the players have been training hard and playing in WSA tournaments.  I hosted a WSA at my home club to give them an opportunity to play in a competitive environment on home soil to prepare.”

Canada last finished in the top eight in 2000.  The team took 13th place the last time the event was held in Canada – in 2006 in Edmonton, where Jans made her sixth and final appearance for her country – and last time, in France, finished in 12th place.

“I think we have a chance of finishing second in our pool, which would put us in the top eight,” said the team coach.  “We’d have our work cut out for us though.  In the end, we’d like to finish better than two years ago.

“We have a young team: Players range from 20 to 24 and are committed to squash for a long time so we could really be a force four years from now!”

Squash Canada’s Executive Director Danny Da Costa added:  “Although we are sending a very young team to the Women’s World Team Squash Championship, our girls have tremendous potential for success.

“I think the world will soon take notice of the excellent work being done in Canada by our Performance Director Jamie Hickox, our National Coaches and the Centre of Excellence staff including former world number one Jonathon Power, who are working hard to restore Canada to the forefront of world squash.” 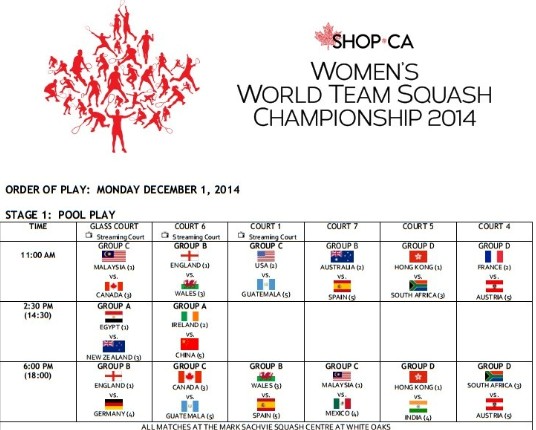