The origin of squash 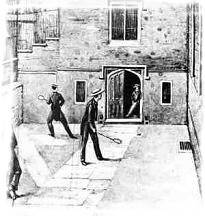 The origin of squash can be traced back to the early 19th century in England.

Just like tennis, badminton and “pelota”, squash is said to derive from the famous “Jeu de Paume” (Court Tennis).   Court Tennis was invented in France in the 13th century, even though, according to some historians, variations of the game are to be found in the antiquity. 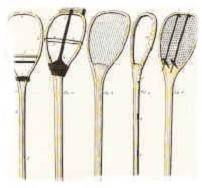 Throughout centuries, Court Tennis underwent numerous changes. For a long time the game

was played either with bare hands, or with gloves.

Wooden bats were then used, although they remained rudimentary.

It is only towards 1505 that the first wooden racket (ash) boasting a long shaft and strung with sheep guts was created.

It weighed approximately 400 grams and was 66 centimeters long.

The plane of strings, which was either quasi-spherical or square, was usually 16.2 centimeters wide by 16.5 centimeters long.

From “Jeu de Paume “ to Squash

At first, the English used to play with rackets.

Then, circa in 1850, invented “rackets-game”.  This new game was played by several players, using rackets and a leather ball but on a large court (18.21m X 9.08m), first outdoors then indoors.

Quite fashionable in those days, « rackets» was very popular among English aristocrats, including at the prestigious Harrow School of London.

Indeed, it was at that illustrious school that two students, while waiting for their turn to play “rackets” killed time by striking the ball against the wall. The early beginnings of squash had just been invented.It was not, however, until a hollow, soft rubber ball was created that “rackets” was swapped for squash. The name of Squash was then given to this game, in reference to the sound of the ball squashing against the wall.