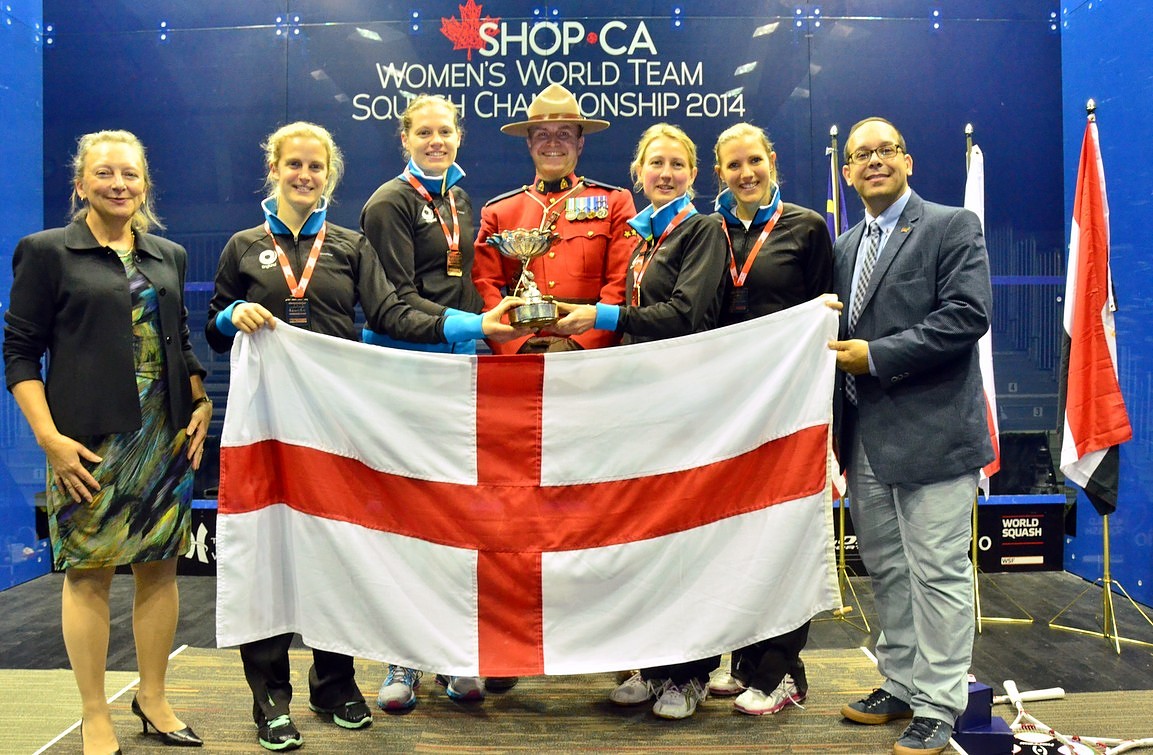 It was less than 24 hours earlier that third seeds Malaysia created the upset of the championship at White Oaks Conference Resort & Spa in Niagara-on-the-Lake, Ontario, by dethroning title-holders and favourites Egypt. Meanwhile England established a new record 11th successive appearance in the final by seeing off Hong Kong China. 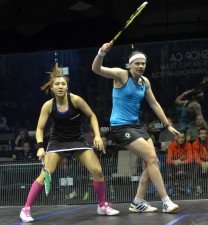 “That was so, so, different from yesterday,” said the world No.17, referring to the semi-final decider in which she beat the Hong Kong number three to put England into the final. “I wanted to get the girls off to a good start.

“I’m sharing with Laura, the team captain, and she’s been amazing. It’s good to have this solid team support. I know how much Ali and Laura want this after being in losing finals before.” 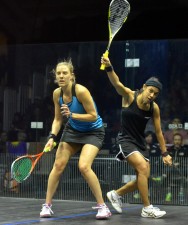 Next on the all-glass showcourt were the two teams’ top-strings – world number one Nicol David facing England’s world number two Laura Massaro for the 30th time since 2005. The Malaysian was in dominant form – extending her ten-year unbeaten record in the event to beat Massaro 11-8, 11-9 11-3 and force a decider.

“I’m so pleased with my performance today,” David said later. “Beating Laura is never easy, I had to dig deep, and beating Laura 3/0 is a great result. I’m so glad I brought a point to the team, it was such a wonderful feeling to be in the final. It was a dream for us.” 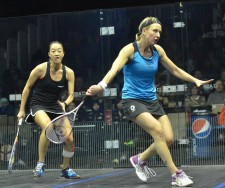 England looked set to claim the title in straightforward style when Londoner Alison Waters took the first two games and led 8-6 in the third. But plucky Low Wee Wern – the world No.7 from Penang who had clinched Malaysia’s historic place in the final the day before by winning the decider – reeled off five points in a row to reduce world No.5 Waters’ lead.

The triumph marks England’s seventh title since 1985 – but the first since winning it in Edmonton, Canada, in 2006. 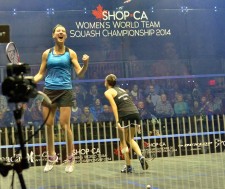 “It was a great final,” Waters told event MC Vanessa Atkinson. “We actually won here last time in Canada, so it’s a good omen for us.”

Waters had made an impressive comeback after the loss to a lower-ranked Hong Kong opponent on Friday which forced a surprise decider in the semi-final.

“Yesterday was probably the hiccup I needed. I got my game wrong and my tactics wrong. Today I just played my game,” said Waters.

“Even after losing the third game, I was able to keep my composure. 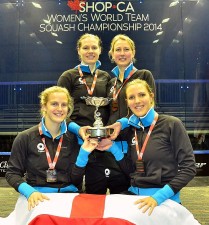 “We have absolutely amazing support – we’re so lucky to be here with the support we get.

World individual champion Massaro echoed her team-mate’s view. “This has been an amazing event from every point of view and thanks to Squash Canada for doing such a great job.

“A massive congratulations to Malaysia for what they’ve achieved this week – it was a great final. 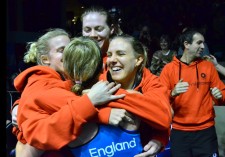 “There’s been an unbelievable team spirit in the England camp this week – and I honestly believe that is what has made the difference. And without the support of Sport England and the English Institute of Sport (EIS), this would not have been possible.”

England team coach David Campion added: “It’s been a great week for us, despite the ups and downs, and our success is down to the professionalism of the players and the spirit in the camp. It was a superb final.

“We always felt that Sarah-Jane would give a performance today and she did.”

Malaysian team manager Sharon Wee was more than happy with her team’s performance. “Being in the final is a fantastic achievement – this is a very special moment for us. It has made us believe we can win. I am very proud of our team.

“Wee Wern never gave up, but Alison was very calm.

“Congratulations to England for their win and to Squash Canada for hosting such a great championship. The event has shown that women’s squash is fantastic!” 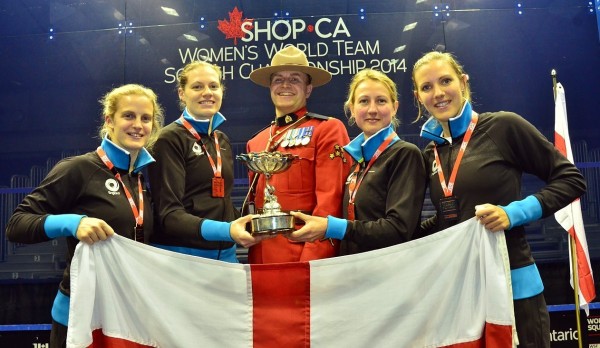 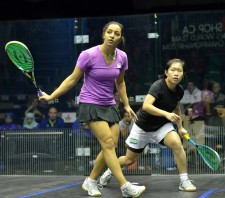 “After yesterday, we needed to win that to restore our players’ confidence,” said Egyptian coach Omar Elborolossy. “They are a very strong team and I am proud of them. They played solid squash today.”

Sixth seeds USA beat France 2/0 in the play-off for fifth place to record their best ever finish in the event. “To improve on our seeding is awesome,” said player/coach Natalie Grainger. “What we did today shows that we are a legitimate force now.

“It is fantastic to see these players develop from 12-year-olds into what they are achieving now. Amanda (Sobhy) has great attitude and Olivia (Blatchford) is now a genuine world class player – she’s really stepped up her game.

Wales, the No.10 seeds, achieved their best finish since 1987 after beating New Zealand in the play-off for 9th place.

“We wanted to at least make our seeding, if not better it, so we are really pleased with today’s result,” said coach David Evans. “It’s superb – we had a big win against Canada yesterday and the girls then put in a big effort to win today. 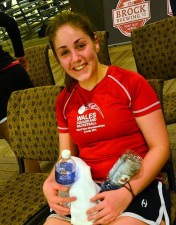 “Our number one Tesni Evans is only 21 and she’s still new to this – but she had some great results, beating Laura Massaro and taking Rachael Grinham to five. So many teams have strong number ones – and strength in depth – so she’s made a remarkable effort. She’s upped her training regime recently and now she’s seeing the rewards of all this hard work.

“We haven’t had funding for our world championship teams recently – but after our results in the recent European Championships, Sport Wales agreed to give us funding this time. It actually came too late to enter this year’s event, but one of the teams pulled out so we were able to take their place at the last minute. 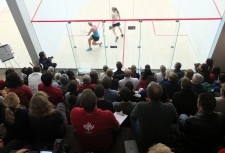 “Without the help of Sport Wales, we wouldn’t be here, so I’m extra pleased that we’ve done it for them.”

“It’s fantastic to finish on a win,” exclaimed Canada coach Melanie Jans. “It’s amazing – we played South Africa in the play-offs last year, and Samantha (Cornett) this time got revenge for her loss to Siyoli (Waters), so I’m so pleased for her.

“It’s been a great event, the venue, being in Canada and getting the support. It’s been a pretty long week, so it’s good to finish on a high.” 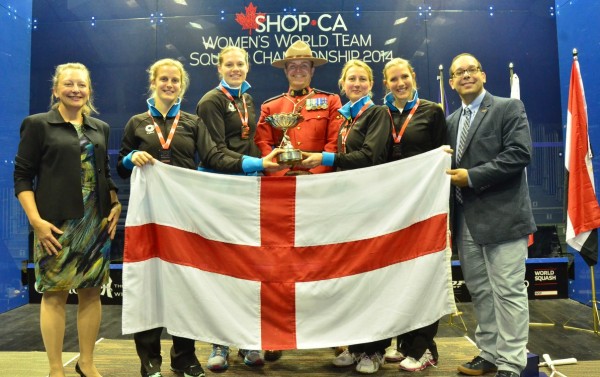