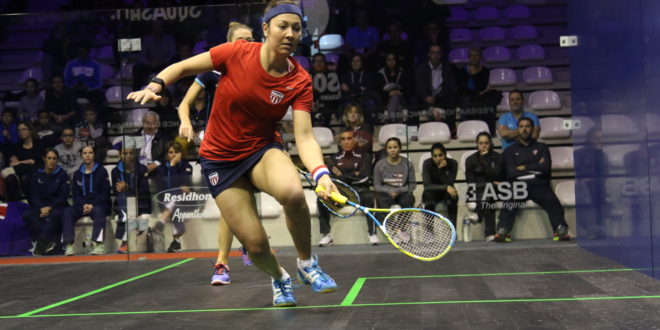 INTERVIEW WITH AMANDA SOBHY, USA AFTER WINNING HER MATCH  AGAINST DONNA URQUHART 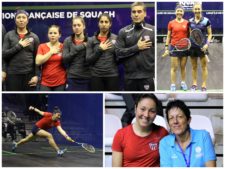 Could you just give me a few details about yourself ?

So, I’m Amanda Sobhy. I’m ranked number 7 in the world. I’m the American number 1. I’m based in Boston  where I train with Thierry Lincou. He’s my full-time coach. I graduated from Havard University in May 2015 where  I was undefeated all four years there. I’m a three-time US national champion. This season, I’ve  made it to the final of the Hong Kong Open  and in September I got through to the semi-finals of the US Open.

OK, so you’ve moved up the ranks quickly over the last few years. What’s the secret ingredient ?

I’m sure it’s nothing in common with my coach. He’s such a phenomenal coach.

Oh, it’s a dream. He’s amazing. I could not have asked for a better coach to have. He’s just so engaged and invested and every single session we have is with a purpose and of quality. I love working with him. I think I might cry if he ever moves out of Boston or I might have to move as well.

Yes, he is. He’s in charge of the  women’s US national team. This is the very first time, the first trip he’s been with us. Hopefully, he’s loved it so much  that he wants to come back for the next trip.

You probably realize that people are so pleased to see him here.

I know. I love it. We’ve got all the French support as well so it’s great. We’re lucky to have such a great team.

Have you done any special preparation for today ?

Absolutely. This was a very tough one. We really wanted to come out and make a statement because Australia was seeded 6 and I think that we should have been seeded 6 and it would have changed our pool dramatically and given us a much better draw and eventually got us to the semis. So we were very bummed about that and we wanted to go in today and prove that we’re the better team.

How did it feel being first on court ?

It isn’t easy being first on court but I like it. I know exactly what time I’m starting. I can plan my eating, my warm up and get organized and have  a routine. Because I’m first on, I want to get the team off to a good start and I ‘m lucky that I’ve had this preparation playing College squash, having a team of nine girls that depend on you to win and so I know how to handle the pressure. This is really fun and I love it. Winning 3-0, I’m very pleased with that. It’s so important to win that first match  to gain confidence and say we can do this.