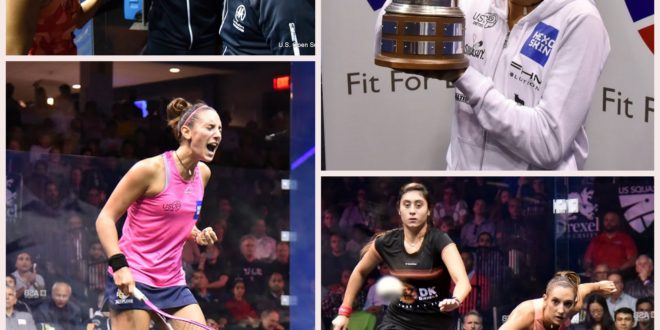 CAMILLE SERME OVER THE MOON

A year and a half after her first major title in the British Open, Camille Serme had a dream week in Philadelphia. On fire from the quarters onwards, the Frenchwoman won the US Open after beating the two best players in the world – Laura Massaro and Nour El Sherbini – and producing some amazing squash. This is obviously a good sign for the host country, with the Women’s World Team Championship coming up at the end of November in Paris.

“I just can’t believe it, two weeks ago I was so far away from this, now you’re telling me I am the US Open champion, it’s crazy.” Laughing and crying at the same time, that’s how Camille Serme opened her post-match interview with former US player Gilly Lane, after her stunning victory in the final against world number 1 Nour El Sherbini. It was the perfect ending for a perfect week for the Frenchwoman. In the space of three days, she scalped the numbers 1, 2 and 6 in the world, displaying both incredible squash and constant determination.

What happened two weeks ago? For the first time in over two years, the French number 1 had lost in the first round of a tournament, in Al-Ahram, Egypt. Besides, it was against England’s Sarah-Jane Perry, an opponent she had had the better of since the juniors. “I am not sure it’s a matter of confidence (as mentioned by her long-time coach Philippe Signoret), she told us after her loss. I think it’s rather due to a deeper reflection, especially regarding the way I train. I am trying to look at every little detail and to work even harder. But also to go further in my understanding of the game, as well as the things I must do to keep improving.” For the last two years, Serme has been a member of the world top 8 and consistently reaching the quarters of the World Series events. But a few weeks ago, she told us she was “disappointed not to have reached another final since my British Open title in 2015, and to have finished the season at number 6 in the world. I’ve lost some very tight matches which came down to little details, and that’s frustrating.“

She completely put her frustration behind her in the United States, and her reaction after the match showed how happy she was. She immediately shared this joy with Signoret. “Camille took charge of her own destiny, he analyzed after the final. It was a tough challenge against El Sherbini who had been so impressive all week. The strategy was simple: be in front of her opponent at all cost, intercept as many balls as possible and attack before Nour would. She perfectly stuck to it. However the world number 1 tried everything, especially to hit the ball harder in order to make Camille step back. But she hung in there and defended as well as she attacked! As we say she was on fire, she almost didn’t put a foot wrong … British Open and now US Open, she surely knows how to pick her major trophies!”

Even though she had already beaten Massaro and El Sherbini to clinch her first World Series title eighteen months ago, the second one is even more meaningful. These two players were “only” ranked 4 and 9 in the world at the time, while they have been dominating the women’s tour since (they won five of the eight last World Series combined). To achieve this, Serme produced what’s likely to be the best squash of her career. “Today was a completely different match from the previous ones, she said. Nour put me under a lot of pressure, but as always this week, I knew what I had to do on court and I stayed positive about my tactic.” Her triumph was technical, tactical but also mental, as she perfectly handled the majority of the key moments. Against Massaro, she twice lost a one-game lead before dominating the final one. In the semis, American Amanda Sobhy saved a match point in the third, but Serme managed to regroup to conclude 11-5 in the fourth. And in the final, El Sherbini saved two match balls at 7-10 in the fourth but when a loose ball presented itself Serme finished the match with a beautiful forehand volley, while she had built her success on her backhand (thanks to countless volley drops on this side of the court throughout the week). 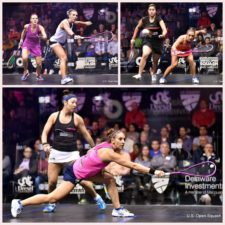 This victory is also a very good sign before the World Team Championship, which France will host in a few weeks. The players that the Frenchwoman upset at the US Open are all number 1 in their country and therefore potential opponents of hers in Paris. In the meantime, Serme won’t be able to enjoy for very long: she’ll be back on court next Friday for the Carol Weymuller ($50,000 $) in Brooklyn, where she may clash to Nour El Sherbini in the final…