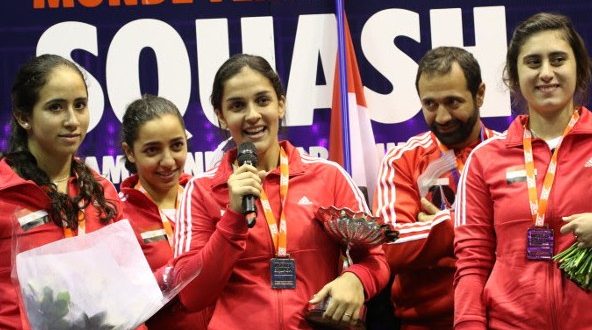 With a four-player squad all ranked in the world top six, Egypt are firm favourites to retain their title in next month’s CGG WSF Women’s World Team Squash Championship in the Chinese city of Dalian.

The first world squash championship ever to be held in China will take place at the Xigang Gymnasium in the Liaoning Province seaport from 11-16 September. The venue will feature two all-glass showcourts, with arena seating, plus four permanent all-glass courts.

The Egyptian team, looking for a fourth title since 2008, will be led by world No.1 Nour El Sherbini, a two-time world individual champion, and include world No.2 Raneem El Welily, No.3 Nour El Tayeb and sixth-ranked Nouran Gohar.

Egypt are expected to face rivals England in the final. The second seeds are seven-times champions after last winning the biennial title in 2014 in Canada. Former world No.1 Laura Massaro, now ranked seven in the world, leads the team – supported by world No.8 Sarah-Jane Perry, world No.10 Alison Waters, and Victoria Lust, who boasts a career-high No.13 ranking.

USA, featuring the Sobhy sisters Amanda and Sabrina in their squad, are seeded third – ahead of Malaysia and Hong Kong China.

Initial action will take place in four pools before the top two teams in each pool will progress to the quarter-finals knockout stage.

The full Pool line-ups are as follows (with seeding in brackets):

Since its launch in 1979, the Women’s World Team Championship has been held in 11 different countries across all five continents – the most recent being France in 2016 when Egypt won the title for the third time, beating former champions England in the final in the capital Paris.