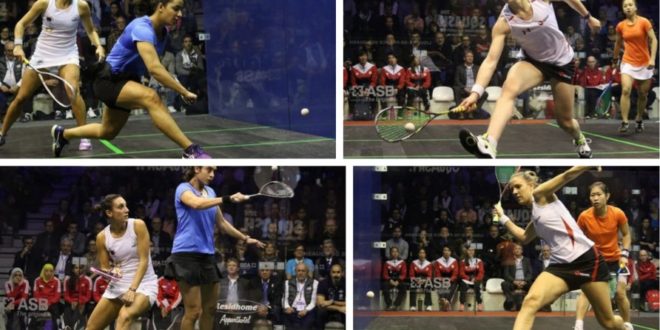 Favourites Egypt and defending champions England, the No.2 seeds, will contest Saturday’s final of the WSF Women’s World Team Squash Championship after victories over hosts France and Hong Kong China, respectively, in today’s semi-finals of the World Squash Federation event in the French capital Paris.

The final tie of the day on the all-glass court at Palais Des Sports Robert Charpentier in the Paris suburb of Issy-les-Moulineaux saw Egypt take on the hosts – with a packed and partisan crowd doing all they could to lift the home team. 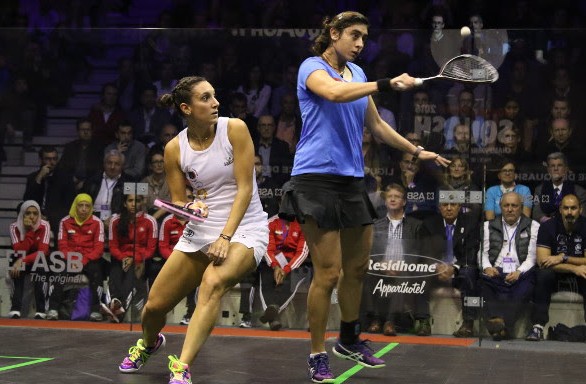 It was the number ones who led the way, Egypt’s world number one Nour El Sherbini facing Camille Serme (both pictured above) only weeks after losing to the top French player, ranked five in the world, in the final of the US Open. Over 12 previous meetings in their career, they shared six wins apiece.

Few points ever separated the pair in the opening game, but the Egyptian clinched her first game ball at 10-8. Much to the delight of the crowd, Serme built up a 7-3 lead in the second – but her canny opponent upped her game to reel off seven points in a row to reach game ball at 10-7, then convert it from 11-10.

El Sherbini maintained a narrow lead through the third before putting Egypt ahead after closing out the match 11-8, 12-10, 11-9 in 41 minutes.

France faced a stern test in the next match when Laura Pomportes, ranked 66 in the world, faced fellow third string Raneem El Welily, now the world’s No.2 player. 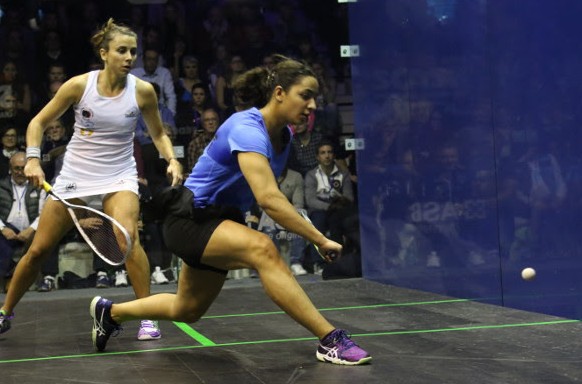 “We might have the top three players in the world, but when you’re playing the host nation, anything can happen,” said Egypt national coach Amr Shabana. “The scoresheet won’t do the first game justice – it could easily have been 3/0 to France.

“The trouble with being top seeds is that everybody expects you to win – it’s that or nothing!

“We have to remember that England and Australia have won this title many more times than Egypt – so to really have something to celebrate we need to win it eight or nine more times and get past everybody!”

El Sherbini acknowledged the importance of her opening win. “I lost to her in the US Open last month so I needed to win that match for my country – I was lucky to finish in three.

“It’s a totally different feeling, playing for your country – and it’s even harder when you’re the number one, having to play all the other countries’ top players. We played India in our first match – and I had to play Joshna (Chinappa)! You have to give 100% every match!

“We’ve really worked hard after losing last time to Malaysia in the semis.”

Second seeds England reached the final for the 12th time in a row since 1992 after beating Hong Kong China, the 4th seeds, 2/0. 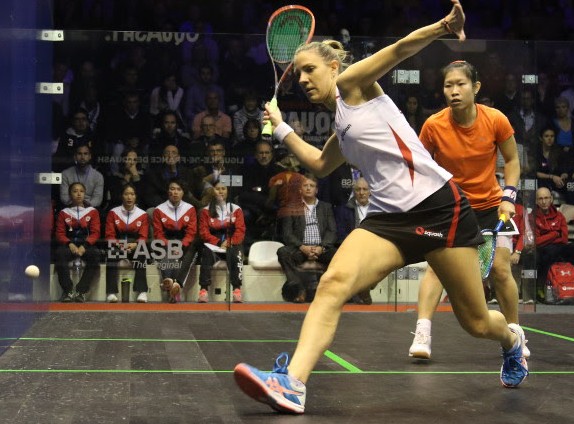 England number one Laura Massaro, ranked four in the world, faced Annie Au (both pictured above) in the opening match. The Hong Kong left-hander, ranked eight places lower, had the upper hand through the opening game and led 7-5 in the second.

But experienced campaigner Massaro, who boasted a 9-4 career head-to-head advantage over her opponent, dug deep to level the match at one-all before taking the next two games to take the match 3-11, 11-7, 11-6, 11-7 after 42 minutes.

England had a safe pair of hands in Sarah-Jane Perry in the next match between the third strings. In the pair’s first meeting, world No.11 Perry despatched Liu Tsz-Ling (both pictured below) 11-4, 11-4, 11-9 in 25 minutes to put England into the final. 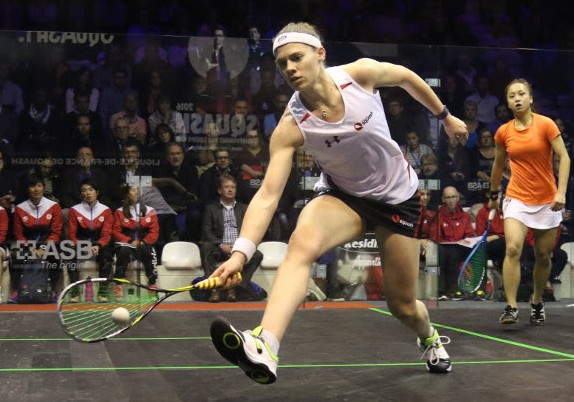 “Annie, who’s always tricky, played to her level – and Laura got off to a bad start,” admitted England National Senior Coach David Campion. “But she didn’t panic and worked out how to win. And that took the pressure off the rest of the team.

“Annie’s tough and whatever the rankings are, winning isn’t a foregone conclusion – especially in the semis of a world event.

“Tomorrow we’ll have to put as much pressure on our opponents as we can. Laura has shown she is capable against Sherbini.”

Massaro conceded that her game wasn’t up to scratch: “Annie is really talented and if you don’t play the right way against her you can be in trouble. My squash wasn’t as good as it should have been today so it just meant I had to fight.

“She’s a lefty too, which makes things different. Part of her strength is making you ask questions of yourself.”

Earlier in the day, the USA team earned itself the chance to repeat its best ever fifth-place finish two years ago in Canada after beating former champions Australia 2/0 in the 5-8 play-offs. It was a Sobhy sister triumph for the No.7 seeds – team number one Amanda Sobhy, aged 23, beating fellow left-hander Donna Urquhart 11-7, 11-5, 11-6, then younger sister Sabrina Sobhy, 19, overcoming Aussie Christine Nunn 11-6, 11-1, 11-4 to earn the place in the play-off for fifth place.

“It’s good that we now have the chance to equal our best ever position of five last time – especially as we have already done better than our seeding and that it is with a young team, which is amazing,” said Team US National Coach Thierry Lincou.

“I just love the youth and energy of our team – the future looks really good.”