For the first time in history, France will play for a place in the last four of the WSF Women’s World Team Squash Championship after defeating former champions Australia in today’s quarter-finals of the World Squash Federation event in the country’s capital city Paris. 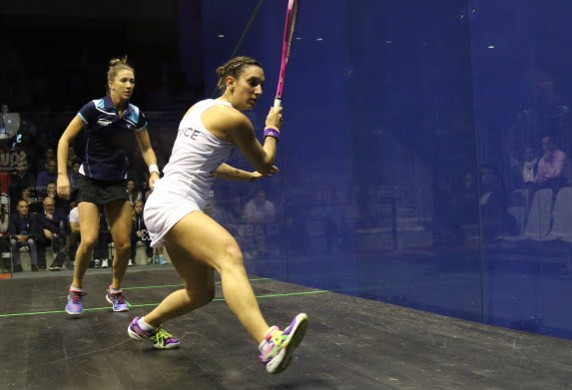 Before an exuberant partisan crowd at Palais Des Sports Robert Charpentier in the Paris suburb of Issy-les-Moulineaux, French number one Camille Serme – the country’s highest-ranked woman of all-time – beat Australian Donna Urquhart (both pictured above) 11-6, 11-4, 11-3 in 27 minutes on the all-glass showcourt to clinch France’s first appearance in the event’s semi-finals in 16 attempts since 1987.

Coline Aumard had earlier put the hosts ahead after a powerful and impressive 8-11, 11-6, 11-9, 11-4 victory over Australia’s former world number one Rachael Grinham.

“I have been working with some of these players for around 20 years, so to achieve this – in Paris – is amazing,” said team coach Philippe Signoret.

“I am very pleased for the team. I guess this is the best moment of my career.”

Serme, overcome with emotion, said: “It’s very special. But I feel so strange right now – as if I’m not really here!

“I was so focussed during the match. Philippe said to me before the match – forget about Coline’s match, imagine you’re going on at 0-0, try just to focus on your game, not the event.

“I’ve never felt like this before – but most of all I am so happy for Coline who has trained so hard for this. She really wanted that win and did so well to give us the lead.”

France, the fifth seeds, will now meet favourites Egypt for a place in the final.

On the day that its top three players took over the top three places in the world rankings, Egypt claimed the first spot in the semi-finals by beating USA, the 7th seeds, 3/0. Nouran Gohar put the top seeds in the driving set with a comfortable 11-3, 11-4, 11-7 win over New Yorker Olivia Blatchford. 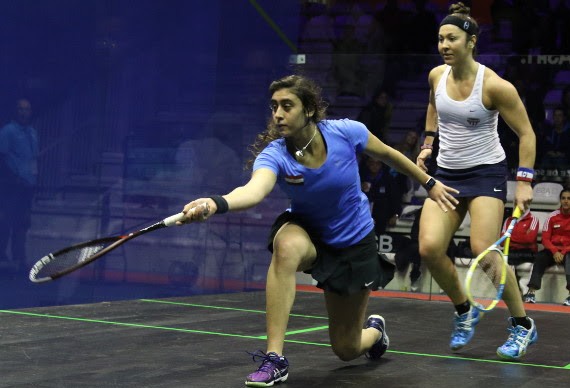 The top string battle promised to be close encounter with US number one Amanda Sobhy boasting a 5/4 head-to-head lead over her Egyptian opponent Nour El Sherbini, the world No.1. El Sherbini (pictured above with Sobhy) took a two-game lead – Sobhy winning five points in a row from 4-8 down in the second. But Sobhy fought back to win the third and reach game-ball in the fourth.

After a best-of-three dead rubber – in which Egyptian number three Raneem El Welily, who today leapt to two in the world, beat Reeham Sedky 12-10, 11-5 – Egypt’s coach Amr Shabana acknowledged that the top string encounter had been close: “Amanda has developed so much in the last two years – she’s a future champion, for sure. I felt confident that Nour would win once she went two-love up – 60% of all sports clashes that reach that score end up successful.

“But if Amanda had won that second game, it could have been a totally different story.”

Defending champions England also secured their anticipated semi-final berth in emphatic style, despatching eighth seeds New Zealand 3/0. Second string Sarah-Jane Perry set up the win with an 11-7, 4-11, 11-6, 11-9 win over Megan Craig – but it was team number one Laura Massaro who had a point to prove as she crushed top Kiwi Joelle King, ranked 10 in the world, 11-6, 11-8, 11-3 in just 27 minutes. 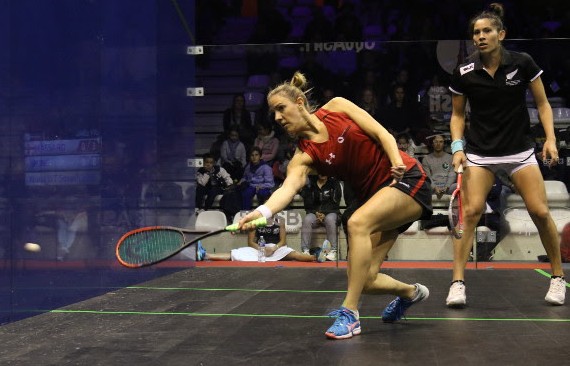 It was less than 48 hours earlier that Massaro (pictured above with King) went down to Amanda Sobhy in the American’s first ever victory over the world No.4. The England No.1 came out with all guns blazing to put that defeat behind her.

“I was lacking a bit of match practice then – but there’s nothing better than a loss like that to get your focus back,” said former world champion and world number one Massaro.

“More than anything else, I’m really pleased with how I performed mentally. That’s when I play my best.

“I’m really happy to do this for the team.”

Massaro’s performance was predicted two days ago by team coach David Campion: “She always seems to come back stronger after a defeat like that. She’s so self-critical. It’s her strength – it’s what’s driven her throughout her career.

“Her attention to detail is what sets her apart. It’s why she’s achieved what she has.”

England will face surprise opponents Hong Kong China in the other semi-final after the fourth seeds pulled off a dramatic 2/1 win over Asian rivals Malaysia, seeded three.

Hong Kong’s third string Tong Tsz-Wing was after revenge in the decider having lost her only previous clash with Malaysia’s 17-year-old Sivasangari Subramaniam in a meeting in Malaysia a month ago.

Tong took the opener but her determined teenage opponent fought back to level the match. After surviving a tie-break third, Tong closed out the match in the fourth to record a tie-winning 11-9, 15-17, 13-11, 11-6 victory. 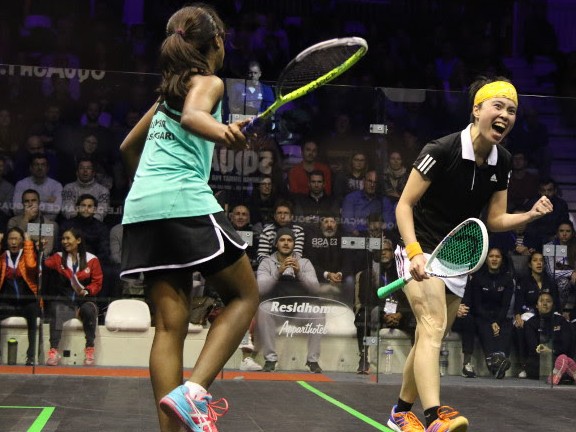 “Our last meeting was on a very hot court where the ball was very bouncy and I wasn’t at my best,” recalled the excitable Tong (celebrating her victory above) after her Paris triumph. “So I wasn’t thinking about the significance of the match in the tie, I just focussed on winning – I really wanted to beat her.

“The team was really confident – we’re really happy to get into the semis.”

Hong Kong coach Rebecca Chiu added: “We haven’t beaten Malaysia in a long, long time – even in Asia – so this is a big achievement for us.”

Malaysian team manager Major Maniam admitted that he was disappointed by the defeat that will see his team finish outside the top four for the first time since 2004: “We were weakened by the loss of Low Wee Wern just before we left for Paris – but at least we have the consolation that we have some promising young players like Rachel (Arnold) and Sangari for the future.

“There are still two days left and we will give it everything we can.”