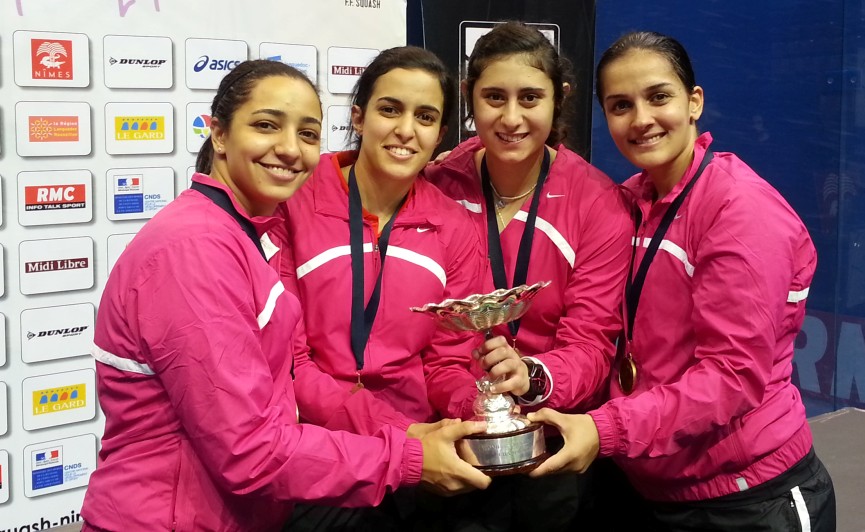 In a dramatic final of the WSF Women’s World Team Championship in Nimes which went to the wire, second seeds Egypt recovered from a match down to upset favourites England to win the World Squash Federation event being held in France for the first time.

Boasting a record entry of 26 nations, the 2012 championship has been staged at both the eight-court Club des Costièresand La Parnasse Arena where, for the first time ever, action has taken place simultaneously on three all-glass show courts.

England got off to a good start when Alison Waters beat Nour El Sherbini in the first ever meeting between the two world top ten players. Londoner Waters, ranked four in the world, took the first game – but the Egyptian underdog, ranked four places lower, fought back to open a 2/1 lead.

The top string duel which followed again saw England take the early lead when world No3 Laura Massaro won the opening game against Raneem El Weleily, the world No2. Hoping to extend her 9/5 head to head record over the Egyptian, Massaro then dropped the next two games – and failed to convert a game-ball in the fourth as El Weleily powered through to win 3-11, 12-10, 11-4, 12-10 to level the tie.

The pattern of the first two matches was repeated in the decider when Jenny Duncalf again put England ahead by winning the first game against long-time rival Omneya Abdel Kawy. But the 22-year-old from Cairo – who has played in every championship since 1998 – moved ahead by taking the next two games.

Determined to reduce the deficit of her career-long head-to head record of 2/12 down to the Egyptian, Duncalf fought hard to draw level – and in the decider won five points in a row to move 7-4 up.

Team coach Amir Wagih was also overjoyed: “It’s so good for Egypt and so good for squash – it was a super final with three matches of unbelievable squash.

“Omneya is back on form – she gave a really classy performance.

“My players have now won all the world titles except one – and that is the women’s World Open title. So I am hoping that I can complete the set at the end of the year in the Cayman Islands.”

England national coach Chris Robertson agreed that the final was a fitting climax to the event. “It was a great final – in a great atmosphere. I am very proud of my girls and their performances – they gave it everything. But, credit to the Egyptians, they came up with the right shots at the right time.

“We always thought it would be close – and hopefully we will learn a little from it.”

In the match on the centre court immediately preceding the final, France faced eighth seeds Netherlands in the play-off for ninth place – a repeat of the pool tie earlier in the week which the ninth-seeded hosts won to provide the event’s first upset.

Second string Coline Aumard gave the large and vocal crowd what they wanted by beating Milou van der Heijden 11-6, 11-5, 11-7 – making way for the team number one Camille Serme, the world No14 from Paris, to take on Natalie Grinham, the world No11 and former Australian who is making her first appearance in the championship for the Netherlands.

Grinham was after revenge after dropping her only match this week to Serme – and took the opening game. But spurred on by the crowd, Serme fought back to clinch a 6-11, 11-8, 11-5, 11-8 victory – helping France to end the tournament on a high.

“It was a fantastic way to finish – it’s a very good feeling,” said French coach Philippe Signoret. “I wish we could play another match with this great crowd – but for a higher position than ninth place!

“Coline played well to put us in front, then Camille and Natalie contested a very high quality match. Camille kept to the strategy that we planned – keeping Natalie away from the front of the court – and it gave us the result we wanted.”

Third seeds Malaysia beat Australia in the play-off for third place to win the bronze medal for the fourth time in a row. After going down to Alison Waters in the semi-final decider against England last night, world No7 Low Wee Wern played a crucial role by beating Aussie number two Donna Urquhart to put Malaysia ahead.

In their 39th meeting since 2000, Australia’s former world No1 Rachael Grinham then took on the reigning world number one Nicol David. Grinham was looking for her first win since September 2007, but once again David was too strong – winning 11-6, 11-6, 11-4 in 32 minutes to wrap up the Malaysia win.

Team manager Linda Geh admitted: “It feels good – but we will come back stronger next time. By then, we hope that Wee Wern will have established herself in the world top five, and this will make us much stronger.”

Wee Wern reflected on the strain of the previous night’s battle with Waters: “Last night was big match for both of us. Alison is really back on form now. It was mentally tough to come back after that – I was a bit up and down at the beginning, but I got back into it so I was very pleased with today’s win.”

Australian team coach Sarah Fitz-Gerald was not unhappy with the outcome: “We exceeded our expectations. Our big day was beating Hong Kong – that was our final. We were all on a high after that so the players have then had to pick themselves up since.

“We really needed Donna to win the first game. Rachael has played magnificently – and I think she has learnt from this that she can get back into the world top 10 – it has given her the opportunity to win big matches again. She’s shown she can raise her game when she’s playing in Australian colours.”

The championship came to a magnificent conclusion for India when the tenth seeds beat Ireland, the No7 seeds, to win fifth place. It was the teams’ second meeting in five days. Joshana Chinappa put India in the driving seat by beatingAisling Blake – but 13-time Irish champion Madeline Perry levelled matters by gaining a revenge win over Indian number one Dipika Pallikal.

It was down to teenager Anaka Alankamony to clinch victory for India when the 18-year-old from Chennai defeated experienced Laura Mylotte 11-8, 11-7, 11-8 in the decider.

“It’s been an amazing week – and this is so good for India,” said Alankamony. “I played her before on the club courts and beat her – but I like playing on glass so I was confident of beating her again. I think this was a big advantage – but my team is a big advantage too!”

India’s national coach Cyrus Poncha was almost speechless: “Fifth in the world – it’s unbelievable. A few months ago, Dipika said we should target to be in the top four in the world, but I thought that was a very tall order. And here we are just one place below.

“It was unfortunate we had Egypt in the quarter-finals – anyone barring the top two would have given us a better chance. We feel we now have the depth to create upsets.”

“It’s nowhere near what we were aiming for but, after yesterday’s loss, playing the fourth seeds gave us the chance to prove ourselves,” said NZ coach Paul Hornsby. “An event like this is a real emotional strain – you’re not only playing your own matches but you’re going through everybody else’s too.

“I’m proud of Amanda – it was a brilliant performance, her first time for New Zealand, and she’ll take a lot of confidence out it. It’s nice to finish on a positive note.”

A 2/0 win over Canada saw 14th seeds South Africa take 11th place. “We wanted to finish in the top ten, so we didn’t quite make it,” said the South African team manager Vivienne Doeg. “We had two chances to beat Hong Kong and just missed out. But our girls played outstanding squash.”