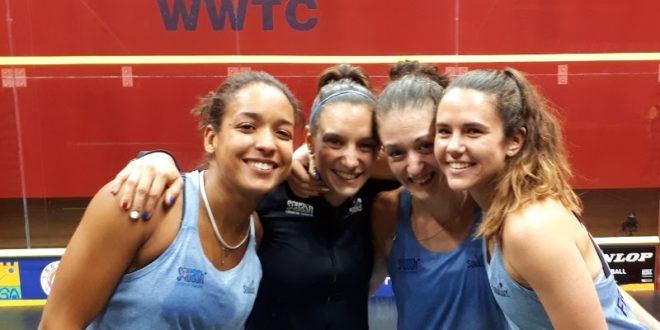 France and Hong Kong China upset the form book in today’s quarter-finals of the CGG WSF Women’s World Team Squash Championship in China by despatching fourth seeds Malaysia and third seeds USA, respectively, to secure surprise semi-final berths in the 2018 edition of the biennial World Squash Federation championship being staged in the seaport city of Dalian.

It was Hong Kong who produced the event’s first significant upset on one of the two all-glass showcourts at the Xigang Gymnasium. Seeded five, the recently-crowned Asian Games gold medallists came into the quarter-finals knockout stage of the championship as underdogs – having lost to Asian rivals Malaysia in the qualifying stage and therefore ending up as runners-up in the Pool.

It was the Hong Kong number one Annie Au who set the tone for the upset, twice leading against Amanda Sobhy and twice seeing the US top string fight back to draw level. But world No.11 Au (pictured below with Sobhy) led throughout the decider to close out the match 11-8, 9-11, 11-4, 10-12, 11-5 after 53 minutes to put the fifth seeds in the driving seat. Fellow left-hander Joey Chan made the most of the opportunity – and repeated her victory over Olivia Blatchford last week in Shanghai by beating the US number two 11-5, 8-11, 11-7, 13-11 in 41 minutes to take Hong Kong into the semi-finals for the third time in a row.

“There was always a chance,” said HK national coach Chris Robertson when asked if USA had been their ideal opponents in the knockout stage. “On paper there was definitely a chance. I don’t think we were favourites, which is why we were seeded five and they were seeded three.

“We played quite well against Malaysia – a 3/2 and two 3/1s, and Annie was 2/0 up against Nicol (David) – so it wasn’t as if we hadn’t been playing OK. Obviously we had a really good Jakarta, so the girls are a little bit more used to winning.

“So today was in many ways our final. We just wanted to give just one last push. Both Rebecca (Chiu) and I told the girls: just use the whole of the court a bit more. Annie and Joey are both good shot players – and Annie just set the tone. She just attacked.

“Once she won, it changed the dynamics a little bit: Joey has a chance, and Joey beat Olivia just last week in Shanghai, so you know you’ve got a chance. And she went out there and played – and used the front of the court a little bit more than she’s done earlier in the week.

“I don’t we were favourite at number three so maybe the playing order today helped us a little bit.

“You’ve just got to take the opportunities when they come – and I don’t think we did that against Malaysia. But I think we did it a little bit more today.

“I’m absolutely delighted. To come here and win a medal is really beyond our expectations. Now we can go and play Egypt with absolutely zero expectation – and go on and enjoy it!” It was in the evening session that France, led by world No.5 Camille Serme, pulled off the day’s second upset by denying Malaysia a place in the last four for the second time in succession. Serme led by example, taking just three games to overcome her illustrious opponent Nicol David, the former world No.1 (both pictured above), 11-9, 11-2, 11-5.

David, making her ninth successive appearance in the championships since 2002, boasted a 19-2 head-to-head record over the French number one going into the match – and the win proved to be Serme’s third in a row over the past 10 months.

Buoyed by this unexpected advantage, France’s second string Coline Aumard recovered from a game down to defeat Malaysian teenager Sivasangari Subramaniam 8-11, 11-8, 11-8, 11-8 before collapsing in tears of joy with her jubilant team-mates (all pictured below) on the showcourt. “Today Camille played really, really, well – and maybe Coline played her best game ever,” said French coach Philippe Signoret afterwards. “I am so happy for the girls. We were seeded six and we now have a bronze medal – and maybe more!”

Hong Kong now play defending champions Egypt for a place in the final – but the firm favourites suffered a major blow in their tie against 7th seeds New Zealand when top string Nour El Sherbini, the world No.1, went down 11-9, 11-9, 11-7 to Kiwi Joelle King (see below), ranked three places lower. “I know that Nour Sherbini is always going to have strong matches – because, if anything, all the countries have at least one or two good players,” explained Egypt coach Amr Shabana, the four-time world champion, later.

“She started off well – but what I really liked about Joelle today was that her demeanour inside the court was amazing. She was very positive, very composed and focussed.

“Joelle is a very solid player – you can see from the results – and she deserved her win today.

“This is early in the season and Nour likes to take her time and ease into things. She only started training in August. She likes to peak towards the majors of the year – even though this is important for her. We’re lucky to also have 2, 3 and 6 in the world in the team!

“But, in the world teams you are playing for your country – you are not playing for yourself – so it’s very easy to get stressed out. It’s good to experience this stress – it’s very healthy to be put in this position.” Former champions England were the final team to secure their place in the semi-finals – beating 8th seeds Canada to set up the last four clash with European rivals France. Team number one Laura Massaro battled for 45 minutes to overcome her Canadian equivalent Samantha Cornett (both pictured above) 7-11, 11-8, 11-6, 13-11 – having to save game balls in the fourth to prevent a decider.