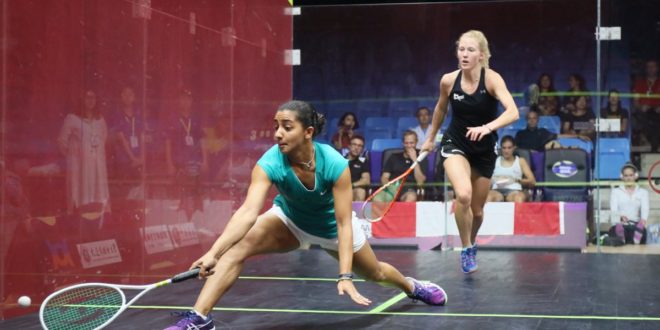 Despite it only being the second day of qualifying action, it was an important one for the top four seeds Egypt, England, USA and Malaysia – all of whom pulled out all the stops and confirmed their positions in the quarter-final knockout stage of the biennial World Squash Federation championship in the seaport city of Dalian.

Arguably, the key tie was the afternoon battle between Malaysia, the fourth seeds, and Asian rivals Hong Kong China – the fifth seeds who less than two weeks ago deposed Malaysia as the Women’s team gold medallists in the Asian Games.

Eager to avenge the loss of their eight-year reign, Malaysia went to battle on the all-glass showcourt centre-stage at the Xigang Gymnasium with Nicol David, the country’s most successful woman athlete in the Games, at the helm. David went into the match boasting a 26-1 career head-to-head lead over her opponent Annie Au – but the Hong Kong left-hander quickly built up a 2/0 lead as the Malaysians’ revenge bid faltered. The now 35-year-old David (pictured above with Au), who topped the world rankings for an unprecedented 109 unbroken months, bravely fought back however and eventually put her team into the lead following her courageous 6-11, 6-11, 11-6, 11-4, 11-6 victory.

“The first match was crucial,” admitted Malaysia coach Peter Genever afterwards. “Annie was really controlling the game at the start so Nicol did brilliantly to come back. We needed to warm the ball up between games – it was quite cold on there.

“We changed the ball after the second game and it was a bit more lively, which suited Nicol’s game. It almost became the start of a new match – and once Nicol got her rhythm, she really got into the game.

“Sangari played really well too. Wee Wern hasn’t played a massive amount of glass-court squash competitively since her comeback so she’s still finding her feet – she wasn’t happy with how she played, which is often the mark of a good player when they’re playing well and still think they could be better!”

On the significance of the tie, so early in the competition, Genever added: “It’s a little different from the Asian Games where the pools are a bit bigger – so this was massive!

“The girls didn’t need a lot of motivation – they were keen to do well today. It was a good win for us.”

Another battle of similar proportions took place on an adjacent all-glass court where third seeds USA faced France, the sixth seeds. USA, whose highest finish to date is 5th, are relishing the opportunity of a best ever result in 21 appearances in the event – while France are eager to show that their 2016 third-place finish on home soil was not a flash in the pan. The opening match between the two countries’ top players lived up to expectations. Amanda Sobhy, a former world No.6 coming back from injury, faced French star Camille Serme, the reigning world No.5 (pictured above, left, with Sobhy) fresh from a major upset over world No.1 Nour El Sherbini in last week’s China Open.

A straight games win by Olivia Blatchford over Coline Aumard gave the tie to USA before Reeham Sedky survived a 62-minute five-game marathon over France’s No.3 Melissa Alves to give the third seeds maximum points.

On the significance of the tie, US coach Thierry Lincou – the former world No.1 from France, said: “We know that the finishing position in the pool can determine a slightly easier draw in the quarters – that’s why that match was very important.

“Today Amanda won – but it was really close. And our number three was the same thing – it could have gone either way. There are four teams who are very similar, so in the quarters it’s going to be as tough.

“I thought Amanda would have a chance today – but I knew Camille would be super-tough as she’s so consistent – last week beating Sherbini, someone she hadn’t beaten for a long time, so her confidence would be super-high. It was Amanda’s first tough test of the season – it is a good win for her confidence.”

But how easy was it for the former French squash supremo to take down his country-of-birth in this way? “It’s my job ….. but it was tough!” admitted the smiling Frenchman. “It took me back a couple of months ago, during the football World Cup, when my natural instinct was to support the ‘bleu, blanc et rouge’.

“But my job is here in the US – and I think we’re bonding really well. This is the first time for me. When I looked at the seedings, I said ‘oh no’!”

Second seeds England, who hold the phenomenal record of having reached the final in all but one of their 19 championship appearances since 1981, took on seventh seeds New Zealand for the anticipated top position in Pool B. Laura Massaro, the former world No.1, led the way for England – eager to put behind her a shock early China Open exit last week in Shanghai. In her 101st England appearance, Massaro fought back from a game down to beat double Commonwealth Games gold medallist Joelle King (both pictured above) 11-13, 11-4, 11-9, 11-7. Team-mates Sarah-Jane Perry and Alison Waters quickly wrapped up the remaining two rubbers to ease England into the last eight.

“I’m happy with that,” said England national coach David Campion. “On the back of Laura losing last week, she came out in a big match like that against Joelle. She finished so strongly last season and had a great summer of training – so last week was a huge disappointment to her, losing 3/0 like that.

“Playing well today was important for her – and that impacts on the team. At least she’s shown herself and everybody else that she’s a big threat. You need number ones to play well.

“It’s good to get that under our belt – stage one is done now. We’ve come here with aspirations to win.”

On England’s final record, Campion continued: “We’re all aware we’ve had a good track record – putting on an England shirt is a big deal for us. England has a good pedigree. Hopefully we can be successful again.”