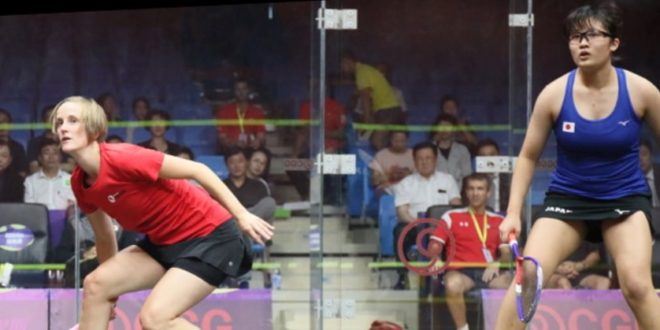 The top eight seeds enjoyed a trouble-free outing on the opening day of action in the CGG WSF Women’s World Team Squash Championship – the sport’s first world championship to be held in China, in the seaport city of Dalian.

Perhaps the most notable qualifying encounter was the opening Pool A tie on one of the two all-glass showcourts in the city’s Xigang Gymnasium – which also boasts a further four permanently-sited all-glass courts on the centre’s fifth floor – between two of the giants of world squash.

Champions Egypt, the top seeds, faced former champions Australia, this year the No.9 seeds. Egypt carried on where they left off in the 2016 final in France, seeing off their opposition in style – third string Nouran Gohar beating Sarah Cardwell 11-7, 11-8, 11-8 (both pictured in action below), before team number one Nour El Sherbini defeated Aussie Donna Lobban 11-1, 11-2, 11-9 and second string Nour El Tayeb secured maximum points following a 11-5, 11-8, 11-8 win over Christine Nunn. With its four players in the world top six, Egypt are firm favourites to retain the title: But Egypt coach Amr Shabana had some sympathy for underdogs Australia:

“I know what it’s like,” said the four-time men’s world champion. “I remember back in 1998 when Egypt came up against Australia. They were the top seeds and we had only being playing in the event a short time. They had great players like Michelle Martin, Sarah Fitz-Geraldand Liz Irving – and they beat us easily!”

The other tie in Pool A saw No.8 seeds Canada beat Germany 3/0 – with Nikki Todd, Danielle Letourneau and Hollie Naughton all claiming straight games wins.

“It’s always nice to get the first one out of the way ang to get onto the court.

“Most of the teams here you can’t take lightly, but today gave us the chance for us to rest Sam (Cornett), our number one, and let Nikki have a go. We’ve got four players and we’re going to need them all.

“We haven’t finished top eight for a long time so our first priority is to finish second in the group – realistically Egypt are going to be a tough nut to crack – then get to the top eight play-offs and see what happens. Our real goal is to get into the top eight.

“We’ve got great depth – our players are all very similar. Thed let everyone play on the court,” said Canadian coach Graeme Williams. “We’ve been here for five days – a long time – so we’ve been itchiny’re all battle-hardened and ready to go.” It was in Pool B that former champions England began their 2018 campaign by beating 10th seeds Japan 3/0. In the first match, Victoria Lust put the No.2 seeds into the lead by beating the event’s youngest player Ayumi Watanabe (both pictured above), aged 16, 11-3, 11-5, 11-5.

Also in Pool B, seventh seeds New Zealand beat Finland 3/0 – without dropping a game. Whilst the Kiwis have participated in all but one of the championships since 1979, their opponents were making a comeback after a 22-year gap since 1996.

“It’s great to be back here,” said Finland coach Ari Pelkonen. “I’m so pleased to be with these players – and they really want to improve. We are not in the top eight but it’s very good experience for the players to be here.

“At the moment we have three good players – one is training in the States, one in the UK and one in Germany – and in two years I hope we will have more.

“It’s my aim to be back in two years in Malaysia – and it’s the girls’ aim too!”

In the evening session, fourth seeds Malaysia beat South Africa, the 12th seeds, 3/0. Team number Nicol David was not only celebrating her ninth successive appearance for Malaysia since making her debut in 2002 – but also her 50th match in the event.

“I had no idea,” conceded the former world number afterwards. “But it feels great!”

The 35-year-old from Penang, recently voted the Greatest Woman Player of All-Time in a poll conducted by the PSA, is enjoying a resurgence in her career after winning a record fifth Asian Games gold medal last month.

“It’s just good to get back into the momentum of this event, and good to be back with the team again after the Asian Games,” David continued. “The Games was very special and I was very proud to win gold for Malaysia – every medal counts there.

“I took some time off in the summer – it was about two and a half months. I needed space to do other things. I kept up my training of course – but I needed time to refresh. I had to find my edge again – but I never lost my passion for squash.” To see the hosts compete on the all glass showcourt in his home city of Dalian was a dream come true for Championship Director Wang Guoguang, General Secretary of the Dalian Squash Association. It was just over two years ago, when he announced his intention to bid for the 2018 World Championship, that Wang said:

‘The city has been a great supporter of squash and I would like to show my appreciation to the city by bringing the World Championship here – it would be a great milestone in my life.’

Wang said today: “We had to work very hard with the local government and the sports council to achieve this dream – but as a passionate supporter of squash, I wanted to give something back to the city and the country.

“If this is successful, I want to bid for the Men’s World Team Championship – and then stage a men’s and women’s PSA World Tour event here each year.” Previous Day ONE: Seeds sail through opening round
Next Day TWO: Top Four through to Quarters