Egypt are still the Women’s World Team Champions after beating England in a repeat of last year’s final in Paris.

Resting world number one Nour El Sherbini, first up for Egypt was Nouran Gohar, taking on Alison Waters. In a see-saw match that saw a lot of involvement from the referee, it was Gohar who finally prevailed as she forged ahead in the fifth.

The victory was clinched by Raneem El Welily, beating Laura Massaro in four games. The Egyptian was in sublime form in the first two games, and although Massaro recovered from 5-7 in the third to reduce the arrears, Welily was in control in the fourth as she took her team to victory.

Defending champions Egypt fulfilled their seeding in the CGG WSF Women’s World Team Squash Championship today in China, successfully retaining their title by beating perennial rivals England, the No.2 seeds, 2/0 in the final of the biennial World Squash Federation championship at the Xigang Gymnasium in the seaport city of Dalian.

It was the two nations’ fifth meeting in the final in since 2006 and Egypt’s fourth triumph over the seven-times champions.

Things looked to be going the way of the favourites early in the opening match between the third strings Nouran Gohar and Londoner Alison Waters. Such is the might of the Egyptian squad that they were able to rest their number one – the world No.1 Nour El Sherbini – yet still field at third string Nouran Gohar, the squad number four who is ranked six in the world! 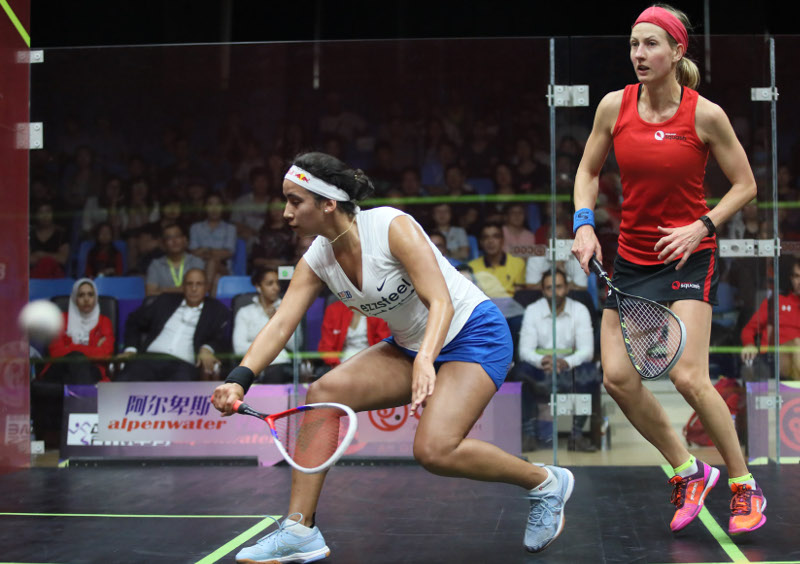 Experienced Egyptian world team championship campaigner Raneem El Welily then faced England’s Laura Massaro – both former world number ones. The match was the pair’s 31st meeting since May 2004 – with the English player having a 19-11 head-to-head advantage going into the match. 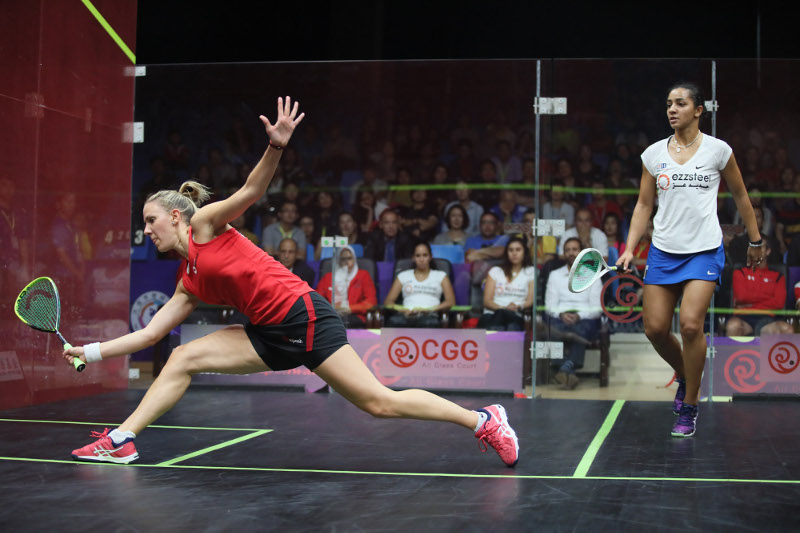 El Welily, the reigning world No.2, took a two-game lead over Massaro before the Lancashire lass reduced the deficit by winning the third game. But the fourth game was a short affair, El Welily dropping just three points before winning 11-3, 11-8, 9-11, 11-3 to give the title to Egypt.

“You always forget about how hard it is for managers and coaches to watch the players – especially on the women’s side where it’s all about tactical squash,” said Egypt coach Amr Shabana, the four-time world champion afterwards. “The attrition and speed has gone up in the last ten years. But at the end of the day it’s very tactical – and you can see the tactics going back and forth.

“So I am very proud of the girls especially after Nour El Sherbini messed up her Achilles tendon yesterday – so I am very happy that they stuck together and kept it together.”

When asked if the approach to this fifth final against was any different from before, Shabana responded: “I tried to fire them up: I asked them, just before they started to warm up, how many times they have won the world team title? I know England has won it seven times – but how many times have you won it, how many times did England win it?

When reminded that Australia have won the title nine times, Shabana immediately said: “So we are not even among the two best teams yet! We might be higher in the rankings but by far we’re not the most dominant nation as of yet. Yes, we’re higher-ranked right now, but people tend to think we have always been this!”

Which nations represented the biggest potential threat to Egypt in the future? “Hong Kong, Malaysia and India – in that order,” said the coach. “After that you can see USA coming up next. Hong Kong have an amazing system, as does Malaysia. And USA wants to show off that university mentality.”

England coach David Campion was not dismayed by his team’s performance: “We were fairly confident Alison might be able to get us off to a decent start with her track record against Gohar. But, to be fair, both Raneem and Gohar played really well for Egypt – both played superb squash. And from 2/0 down when Al came back I thought she might be able to do – but it wasn’t to be.

“We can’t really be too disappointed with the outcome when you see the level of squash they play at today.

“It’s another silver medal against Egypt. We’ll keep fighting away and hopefully keep as competitive as this going forward!”

Earlier in the day, USA and Malaysia replayed the 2016 battle for 5th place – again to decide the same position in the 2018 standings. Seeded three and four, respectively, both teams won their pools – then came unstuck in the quarter-finals.

With the day’s ties being played in team orders 3-1-2, third string Sabrina Sobhy put the USA ahead after being 16-year-old Malaysian Aifa Azman 3/0 before older sister Amanda Sobhy clinched the tie for the third seed – and retained their 5th position – by repeating her win over Nicol David exactly two years ago, surviving a tight clash against the former world number one 6-11, 11-9, 11-3, 12-10 in 32 minutes.

“I’m very proud of the team – we’re still a young team, we’re still learning in this competition,” explained US team coach Thierry Lincou, the former world champion from France later. “Even though USA have featured in several world team events, this team is very new – new to the culture of getting used to the pools, and the concept of getting out of the pool into the second stage – which is like another competition. So we are really learning.

“This year we had a better seeding, but that doesn’t guarantee you anything – so we learnt a lesson. I am proud because we beat France, who came fourth – so we beat a top four team – and we beat Malaysia who were seeded fourth. So we are there.

“It reinforces the fact that we belong with the top five countries in the world. There is still a lot of work and hope – but there is a bright future for these guys.”

After the disappointment of failing to make the quarter-finals, former champions Australia fulfilled their seeding by winning the play-off for 9th place. But despite losing, 12th seeds South Africa exceeded their seeding and recorded their best finish since 2010.

Then most dramatic tie took place in the battle for 11th place – in which 10th seeds Japan came back from losing the first match against India, the No.11 seeds, to win 2/1. Hero of the Japan team was second string Risa Sugimoto who was taken the full distance by Tanvi Khanna, saving two match balls in the decider before beating the Indian 9-11, 11-5, 3-11, 12-10, 13-11 in 46 minutes.

“We were seeded ten and disappointed not to achieve at least that position,” said Japan number one Satomi Watanabe. “It’s been a good experience for us being here and, with a young team in Dalian, including my 16-year-old sister, we can look forward to being more successful in two years.

“We have been really well looked after here in Dalian, the hotel has been great and the weather too – and everyone has worked so hard to make the event a success.”

Defending champions Egypt are appearing in their 5th WWT final – all of which have been against England with England winning in 2006 but Egypt triumphing in 2008, 2012 and 2016. This is England’s 13th final in a row, in fact they’ve only ever failed to make the final once!

The final will feature six players in the world’s top ten – Egypt, who are resting world #1 Nour El Sherbini – can call on the world’s current top three players plus number 6, while England’s trio are ranked numbers 7, 8 and 10.